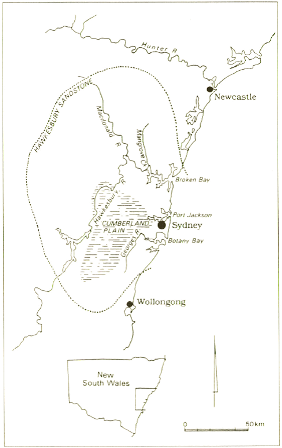 This paper explores some inter-relationships between style, media and social context in a regional prehistoric art style in the Sydney Basin in coastal southeastern Australia (Figure 1). Engravings on open sandstone platforms and a predominantly pigment tradition within sandstone shelters represent a dual media style which operated in the recent prehistoric past. These combined media provide insight into how style may have been used in the pursuit of differing social strategies within this region. There is an assumption that varying degrees of heterogeneity within two components of the one art system – operating simultaneously in the one environment – must be interpreted differently. It is argued that the differing stylistic uses of the two media reflects the pursuit of different social ends. In particular, varying degrees of heterogeneity within the assemblages of the two art media are interpreted in terms of varying social strategies associated with differing degrees of network ‘openness’.

McDonald, J.
Media and social context: Influences on stylistic communication networks in prehistoric Sydney
December 2000
51
54–63
Article
You must be a member to download the attachment ( Login / Sign up )