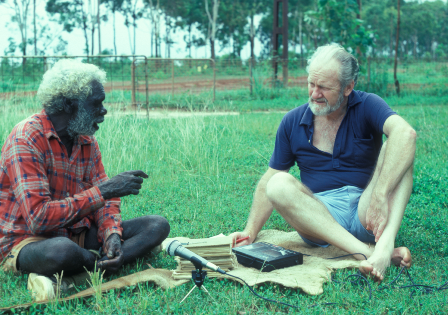 In the final years of his retirement, Les Hiatt returned to Stroud, Gloucestershire, the county from which his grandfather had migrated to Australia. It was there that Les Hiatt’s remarkable life came to an end. Les started out in Gilgandra, western New South Wales. He attended boarding school in Sydney and graduated in dentistry at the University of Sydney. Between graduating and setting up his dentistry practice in Bourke, in 1957, Les sat additional courses in anthropology. He was a keen golfer, an accomplished boxer and he moved competently around the dance floor of the Bourke Golf Club. It was there he met and married Betty Meehan, a local school teacher from a prominent unionist and communist family. Betty and Les left Bourke for Sydney, where Les returned to his studies in anthropology. He graduated in 1958 and received a research scholarship at the newly-formed Department of Anthropology at the Australian National University. It was there he worked with prominent anthropologists John Barnes and Bill Stanner. For his PhD research, he and Betty set off to Maningrida, central Arnhem Land, to study Anbarra/Gidjingarli society. Les gained a teaching position at the University of Sydney in 1965, and remained there as Reader and Professor until his retirement. During his undergraduate and subsequent years in Sydney, Les and Betty were members of the Sydney Push, an anarchist, libertarian grouping at the centre of intellectual life during the late 1950s and 1960s.

Until the early 1990s, archaeology was integrated within the teaching of anthropology at the University of Sydney. Archaeology during the 1960s was enlivened by classical archaeologists, such as Vincent Megaw and Judy Birmingham, working in prehistoric and historical archaeology respectively and Rhys Jones, Richard Wright and John Clegg in the Anthropology Department, all actively involved in Australian research. Jim Allen, Ian Glover and Betty Meehan were graduate students. In terms of intellectual influences, there were many areas of common interest between the newly-arrived ecological anthropologist, Nic Peterson, and the Cambridge-trained archaeologists, influenced by the Higgs-Jarman approach to palaeoecology. This led to what has been termed the ‘Sydney School’ of ethnographic archaeology. The influence of Les Hiatt, and the other social anthropologists at Sydney, was less direct, but pervasive, both in terms of critical intellectual debates and the creation of a libertarian ethos, socially and academically.

Although he himself did not return to Arnhem Land for any extensive periods, Les Hiatt was instrumental in assisting other fieldworkers, such as Annette Hamilton, to work there. The relationships Les and Betty Meehan had formed with individual Aboriginal people, together with Nic Peterson’s demonstration that Aboriginal communities in Arnhem Land still followed many aspects of the hunting and gathering life, led directly to Rhys Jones’ and Betty Meehan’s decision to spend two years on the Blyth River at an Anbarra outstation, where they conducted ethnoarchaeological fieldwork. These connections continued through Les Hiatt’s Chairmanship of the Australian Institute of Aboriginal and Torres Strait Islander Studies, working closely with Peter Ucko and other Principals, a time when the Institute shifted its focus from research about, to research for and with, Aboriginal communities. This came to the fore in 1982, when Frank Gurrmanamana and other community members from central Arnhem Land brought a Marrajirri ceremony to Canberra, where the Rom Poles which stand at the Institute remain a symbol of continuing relationships between Anbarra and the wider community. Frank and Les were also central characters in Kim McKenzie’s film Waiting for Harry (note: not the author). Les Hiatt’s tribute to Frank Gurrmanamana found its greatest expression in the translation of interviews recorded in 1960, published as People of the River Mouth: The Joborr Texts of Frank Gurrmanamana (Hiatt et al. 2002) and used by the National Museum of Australia in their First Australians Gallery.

Les Hiatt was at his best in philosophical and moral explorations of Australian anthropology, exemplified in Arguments about Aborigines: Australia and the Evolution of Social Anthropology (Hiatt 1996). These explorations continued one of Les’ central interests, the fluidity and flexibility of Aboriginal social and territorial arrangements, a topic which is of direct relevance to archaeologists. Les could be a difficult man, he was equally impatient with the imperatives of the moral left and the moral right and he refused the kinds of departmental administrative roles most of us complain about. He was a star performer at the annual cricket match between Sydney and Canberra anthropologists and archaeologists, and also at the after match functions, where he earned a degree of notoriety.

Consistent with his libertarian principles and in true Anbarra fashion, Les Hiatt was a polygynist. Also, in line with Anbarra concepts of generosity (Hiatt 2004), he achieved the status of having more than one wife at a time on rare occasions only, and, he was generous in distributing his wives amongst his classificatory brothers well before his death. Les’ passing reminds us that our mourning for Rhys Jones and Peter Ucko continues. Wherever they are, I hope the wine is up to scratch, I know the conversations will be.

On behalf of the Australian Archaeological Association Inc., I would like to extend sympathy to Betty Meehan, to all the members of Les’ extended family, and to his extensive network of friends in Arnhem Land and elsewhere.

Hiatt, L.R. 2004 Edward Westermarck and the origin of moral ideas. In A. Barnard (ed.), Hunter-Gatherers in History, Archaeology and Anthropology, pp.45-56. Oxford: Berg.

Image caption: Frank Gurrmanamana and Les Hiatt in Maningrida in 1975 (published in Australian Archaeology 66:86).
Harry Allen
Lester Richard Hiatt (1931–2008)
June 2008
66
86
Obituaries
You must be a member to download the attachment ( Login / Sign up )