Kaalpi: The archaeology of an outlying range in the dunefields of the Western Desert, Australia 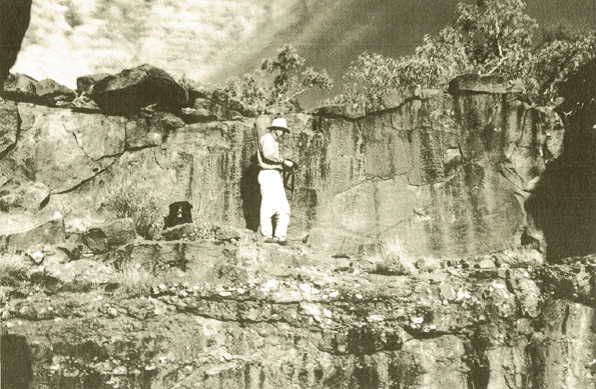 Following a decade of debate about the timing and nature of occupation of desert dunefields (e.g. Smith 1993, 1996; Smith et al. 1998; Veth 1993, 1995, 2000b) and the increasing evidence for Pleistocene occupation of sites which lie at the margins of the Western Desert (O’Connor and Veth 1996; O’Connor et al. 1998; Smith 1989; Smith et al. 1997; Thorley 1998a, 1998b) a systematic program of excavation of sites within core areas of these dunefields is clearly warranted. This paper reports on one such excavation at the site of Kaalpi located within the Calvert Ranges of the Little Sandy Desert, south of Lake Disappointment, WA. These ranges contain numerous rockshelters with evidence for occupation and very abundant suites of rock paintings and engravings. The Calvert Ranges are a small isolated outlier of uplands, containing apparently permanent water, in a vast field of red siliceous dunes.

Veth, P., M. Smith and M. Haley
Kaalpi: The archaeology of an outlying range in the dunefields of the Western Desert, Australia
2001
52
9–17
Article
You must be a member to download the attachment ( Login / Sign up )