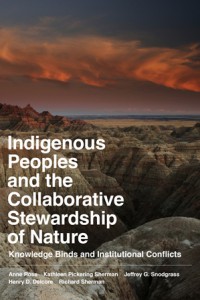 This volume, as the authors note, is an outline for ‘an innovative, alternative example of co-management’ as a way of increasing ‘equal partnerships in natural resource management’ (p.4). The case studies the authors present span the globe – North America, Australia, India and Thailand – and represent different Indigenous groups’ approaches to stewardship of the natural areas within which they live and coexist.

Structurally, the authors approach the volume somewhat differently than most: the case studies are not presented one after the other and then discussed, analysed and parsed in a ‘summary’ chapter that forces the reader to flip back and forth between areas of interest and the author’s comment. Rather the authors attempt to interweave presentations and analyses across the four examples.

The areas used as examples in the volume and the methodologies the authors use vary. The North American example derives from qualitative and quantitative studies conducted on Pine Ridge Reservation; the Australian example was based on interviews conducted with knowledgeable elders of the Dandrubin Gorenpul Aboriginal people of Moreton Bay; the research in India undertaken with the ‘Adivasis’ (first inhabitants) of the Phulwari ki Nal Wildlife Sanctuary of Rajasthan, India, utilised unstructured and semi-structured interviews of ‘matched’ groups; the fourth area involved study of the Thai-Lue and Lue communities of the Pua District of Nan Province.

The reader should not think that the studies of these four communities were undertaken as a globally diverse project; the authors were participants in an American Anthropological Association meeting in November 2003 in Chicago, Illinois. The volume, however, reads at times as if the authors have worked together from the onset to merge their particular talents and analyses.

The subtitle signals the perspectives these authors bring to the issue as they indicate the conflicts between both knowledge systems (epistemology) and the ways that the Indigenous and governmental institutions interact with the contested areas within which they operate. And the areas under discussion are indeed contested. The epistemological issues are often subtle in their impact, while the institutional issues are often bureaucratically charged by national governments unaware of local issues or concerns.

Proceeding from the argument that the differences between Indigenous knowledge and Western knowledge ‘lie primarily on the level of cultural ideals and methodological prescriptions’ (p.33) – and Table 1.1 (pp.52-53) provides a shorthand comparison of these two broad ‘knowledge bases’ – the authors assert that it is important to realise that Indigenous knowledge is not necessarily ‘better’ than Western concepts of understanding. They also point out that collaboration does not operate within an idealised world apart from politics, economics and history.

Chapter 2 is an approach to untangling the historical origins of the epistemological conflict between Indigenous and scientific knowledge. With chapter subheadings such as ‘Before Science’, ‘The Origins of Modern Science’ and ‘Indigenous Resilience, Self-Determination and the Western Double Bind’, this chapter offers a well-thought through discussion of the historic roots in the development of the scientific basis within which most governments operate. It also draws attention to the contemporary manifestations of colonialism and state formation that continue to impact Indigenous involvement in resources that were once open to their use, resources which now are partially or bureaucratically denied them.

In Chapter 3 the authors begin identifying some of the structural and conceptual obstacles that create barriers to true collaborative stewardship over natural resources. They identify 15 barriers to Indigenous participation in natural resource management – 8 epistemological and 7 systemic or institutional – that they summarise in Table 3.1 (pp.96-97) and then discuss in more detail in the remaining portions of the chapter. These foundational obstacles serve as important talking points for the case studies presented in Chapter 4.

Chapter 4 is not the meat of the volume, but it provides the materials for the final course. It is within this chapter that the individual areas of research are integrated into exemplification of the issues that the four separate Indigenous groups face within their regions as they try to stay involved in their home environments and regional resources. These case studies are arranged to discuss each of the 15 barriers identified in the previous chapter. While it is not essential that each case study address all of them, it is important for the reader to recognise how many of them are faced by the Indigenous groups studied. It is not the intent of this review to discuss each of the case studies, but the reader should be able to recognise that the generalities of the global approaches to natural resource management has limitations in relation to the local approaches of Indigenous management of natural resources. Table 4.1 (pp.185-188) effectively presents a cross-tabular summary of the barriers identified and described by the four groups in the case studies.

In spite of the number of barriers to true collaborative management of natural resources encountered by these four Indigenous groups, the authors present some examples of ways that others have been able to enter into what might be perceived as workable ‘joint stewardship’ ventures, primarily in ‘protected areas management’. Recognising that ‘Australia has been at the forefront of international developments in the area of joint management and co-management between modern states and Indigenous peoples’ (p.193), the authors begin with Australian examples, and then move on to examples from India and Thailand). They present the ‘Lakota Indigenous Stewardship Model’ in the following chapter (Chapter 6), as an answer to some of the problems raised in Chapter 5.

The Lakota Indigenous Stewardship Model is summarised in Table 6.1 (p.244) and is ‘a guideline for a process rather than a dictated linear set of provisions to be universally adopted’ (p.237). In this way, it has stronger possibilities of local application rather than a global policy to be initiated regardless of local differences. It ‘integrates culturally appropriate solutions to issues of management and conflict resolution’ (p.237) and constructs a ‘common language that respects both Indigenous and scientific perspectives rather than allowing one to dominate over the other’ (p.238). The model has many tenets: the epistemological connection between natural resource use and conservation; advancement of efforts to revive and implement ecological values and practices of Indigenous knowledge systems; alleviation of some of the disputes that have long characterised tribal/governmental relations; support of tribal sovereignty; and a solid educational effort, among other aspects. With 11 elements presented in four categories, the model provides a complex but straight-forward means of integrating ecological, social, political, and educational aspects of the natural resource management puzzle into a holistic, locally embedded, and culturally significant program of natural resource management.

The findings of the authors’ research and case study analyses are presented in the concluding chapter in Table 7.1 (pp.264-266) and elaborated upon in the following pages. Perhaps more importantly, however, is the recognition that the global influences from outside funding agencies and sources have strong influence on local management of natural resources; with the move toward the proposed Indigenous Stewardship Model, however, the decreased need for outside funding alleviates some of the impact of the economic and political forces outside of the local region.

This volume is important because it provides alternative ways of looking at the conflict between local groups and their governments as well as the problems of applying global policies at the local level. While the authors recognise that the myth of the ‘Ecologically Noble Savage’ is indeed a myth, they also recognise that there are aspects of local ecologies that are better known and appreciated by local inhabitants. The volume provides examples and analyses that will help others develop more localised approaches to local problems; as more and more of these local programmes are identified and detailed, it may be possible to better establish a ‘Global Indigenous School of Thought’ that can be used to supplement and complement the global scientific school of thought that pervades natural resource management. This impetus itself is a very positive contribution to the continuing study of Indigenous people in this constantly evolving global culture.