Human evolution, language and mind: A psychological and archaeological enquiry’ by William Noble and Iain Davidson 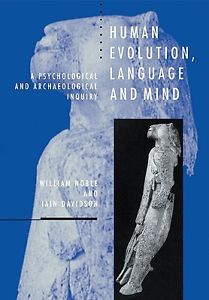 The origin of language is likely to be a topic of research for decades to come. It has become a focal concern for a number of disciplines, ranging from anthropology and archaeology through linguistics, psychology and computer sciences to philosophy – all disciplines that crowd around the science and metaphysics of consciousness. It is the kind of topic that brings into the open underlying assumptions about whether evolution is driven by behaviour, genes or culture; it fuels the debate on the relationship between thought and language; and it intrudes on matters concerning whether machines can ever have consciousness. As with many areas of human evolutionary history, it is an area where there is much to say on the basis of little evidence and the evidence is often so slight that it can be made to fit even the most implausible hypothesis. For this reason, the most productive writing about the topic involves constructing a plausible framework for approaching the evidence, bringing to bear what has been established in other areas of the human sciences on the issue of when and how human language developed. It is concerned with what we need to know in order to draw reasonable conclusions and push knowledge forward, just a little. The realisation that the origins of language may not be all that long ago in evolutionary time gives an added edge to the debate. The emerging consensus is that language as we know it developed with fully modern humans perhaps within the last 100,000 years. Noble and Davidson provide powerful support for this view.

Noble and Davidson, psychologist and archaeologist respectively, capture the interdisciplinary nature of this moment of research into the origins of language and, keeping bold speculation to the last few pages, sketch out a clear framework for approaching the problem. They provide a broad survey of a range of relevant fields – linguistics, cognitive psychology, hominid evolution, primate behaviour and representational systems. Given the slender nature of the evidence, the book is inevitably a study of recent evolutionary prehistory with the topic of language origins in mind rather than of the origin of language itself. The reviews of each subject are dense and often contentious in a positive sense. The book has a strong sense of direction, and the authors are very explicit about when they are expressing a viewpoint rather than demonstrating a fact.

The argument of the book is for the evolution of language as behaviour, its assertion is that the mental equates with language in human life. Language behaviour involves the interactive use of referential signs which exist independent of any particular context. Much argument is devoted to showing that until the coming of fully modem humans tool production did not involve mental constructs of the final form of the object: tool form was rather the outcome of functionally directed behaviour. The authors address the evidence from hominid prehistory that has been used to demonstrate the operation of complex reflective mental process in pre- fully modem humans – burial, art, dwelling construction – and show it to have been over-interpreted. Their sceptical view of the often minimal evidence is appropriate if not always conclusive.

Noble and Davidson are marshalling their arguments for a purpose, since evidence for the existence of mind prior to language would be contrary to their overall argument. For a similar reason they are forced to redefine a core component of Saussure’s theory of the sign in their critique of ‘the mental representation’ picture of mind. At the heart of Saussure’s linguistics is the concept of the sign, comprising two components – a signifier and a signified – which belong to two systems of difference. The signifiers are carriers or encoders of meaning, the signifieds are the concepts encoded. For Noble and Davidson ‘the terms ‘signifier’ and ‘signified’ in our hands, refer respectively to actual signs and actual entities to which they refer’ (p.115). Language thus becomes a system of labelling things, and this is precisely the view of language from which de Saussure was trying to distance himself. The Saussurean distinction allows a concept to exist independent of its encoding in verbal language, albeit that in order to be communicated and hence part of social interaction it does have to be encoded in a sign system. The ‘same’ concept or ‘object’ however can be encoded in different sign systems – gestural, verbal, pictographic – and each conveys different aspects of its meaning. Such a perspective on semiotics runs counter to Noble and Davidson’s subordination of conceptual thought to its verbal articulation. The opposition they develop between a ‘social construct’ theory of mind and a ‘representational’ theory is of heuristic value, but it should not be pushed too far since a comprehensive theory is likely to contain elements of both.

The great strengths of the book are in the breadth of context that it establishes for the development of a theory of language origins, the excellent marshalling of the prehistoric evidence and the way in which it demonstrates the complex interrelationships between different dimensions of human existence. It is possible to engage with Noble and Davidson’s argument and through that to develop a clearer under- standing of the issues without necessarily accepting their conclusions. The book makes a major contribution to the current debate and though it is not an easy read, it is a very rewarding one.

Morphy, H.
Human evolution, language and mind: A psychological and archaeological enquiry’ by William Noble and Iain Davidson
June 1998
46
60–61
Book Reviews
Download
You must be a member to download the attachment ( Login / Sign up )