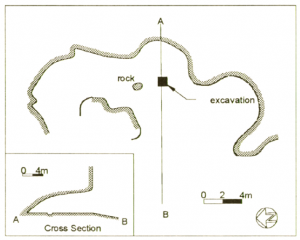 Mimbi is the name given by Gooniyandi people to a place about 90 km east of Fitzroy Crossing in the southern Kimberley (Figure 1). Its western boundary is defined by the Emanuel Range and the eastem boundary by Lawford Range. Both of these ranges are composed of Devonian limestone. Caves have formed within the limestone and in some, perennial water pools are present. The width between the ranges varies between two and five kilometres. It is a relatively flat area of savanna woodland with many ephemeral creeks draining the ranges.

Balme, J.
Excavations revealing 40,000 years of occupation at Mimbi Caves, south central Kimberley, Western Australia
December 2000
51
1–5
Article
You must be a member to download the attachment ( Login / Sign up )