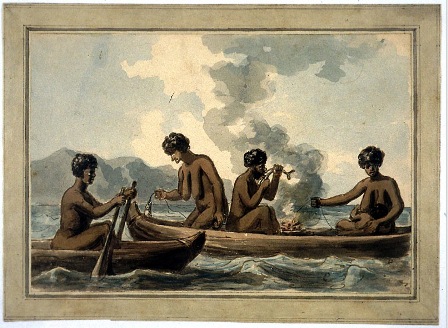 Watercolour illustration of a group of Aborigines fishing, NSW, ca 1790s, attributed to Philip Gidley King (published in Australian Archaeology 67:88 with permission of the Library Council of New South Wales).

This paper overviews Sandra Bowdler’s unique contribution to engendering Australian and Southeast Asian prehistory using three of her papers as case studies. These include ‘Hook, line and dilly bag’, her study of the New South Wales shell midden, Bass Point; ‘Hunters in the highlands’, in which she examines the role of women’s technology and subsistence choices in enabling exploitation of high altitude regions; and ‘Hoabinhian and non-Hoabinhian’, in which she reviews the geographic and locational distribution of stone artefacts of Hoabinhian type within Australia and Southeast Asia and posits that they may be women’s multipurpose tools. The use of ethnohistory and ethnographic analogy is identified as playing a central role in Bowdler’s interpretations of gender roles and gender identity in the prehistoric record. The ethnohistoric record pertaining to Indigenous women’s hunting, particularly of marine mammals, is also discussed and used to underpin an explanatory model for the location and patterning of faunal remains in the Tasmanian midden, the Stockyard Site.

EVENT CALENDAR 7 May 2021
No Events
view all