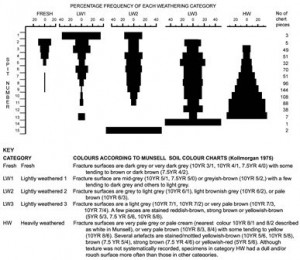 Percentage frequency of chert pieces in each weathering category in each spit of Emu Tracks (published in Australian Archaeology 65:52>.

Between 1979 and 1987 a number of Aboriginal sites were excavated in the Upper Mangrove Creek catchment on the New South Wales central coast as part the Mangrove Creek Dam Salvage Project (Attenbrow 1981, 1982a; Vinnicombe 1984), and PhD research (Attenbrow 1982b, 2004).

For the research project, 20 radiocarbon ages were obtained for 15 of the 28 excavated sites (Attenbrow 2004:Table 6.1). As radiocarbon ages could not be obtained for all sites, the ages of initial habitation and of selected levels in some sites were estimated on the basis of diagnostic criteria: presence/absence/abundance of bondi points; varying abundance of bipolar artefacts; varying abundance of quartz and unidentified fine grained siliceous (FGS) materials (excluding silcrete and tuff); and in some cases the depth of deposit (Attenbrow 1981, 2004:75, Table 6.2). The timing of changes in the diagnostic criteria were based on excavated sites in the New South Wales central and south coasts, in addition to those excavated during the Mangrove Creek Dam Salvage Project, particularly Loggers, Mussel and Deep Creek (Attenbrow 1981, 1982a, 1982b; Hiscock and Attenbrow 1998, 2005:72–76).

Radiocarbon ages have been obtained to confirm the original age estimates for two previously undated sites: Emu Tracks 2 and Two Moths (Table 1). Further dates were obtained also for Kangaroo and Echidna where there was uncertainty about the age of initial habitation. The radiocarbon ages obtained are discussed before reviewing the effects of including these results and of using calibrated radiocarbon ages instead of the previously used conventional ages in the indices used to produce a model of habitation, subsistence and land use for the catchment (Attenbrow 2004:Table 10.4).

Val Attenbrow
Emu Tracks 2, Kangaroo and Echidna, and Two Moths: Further radiocarbon ages for Aboriginal sites in the Upper Mangrove Creek Catchment, New South Wales
December 2007
65
51-54
Short Report
You must be a member to download the attachment ( Login / Sign up )