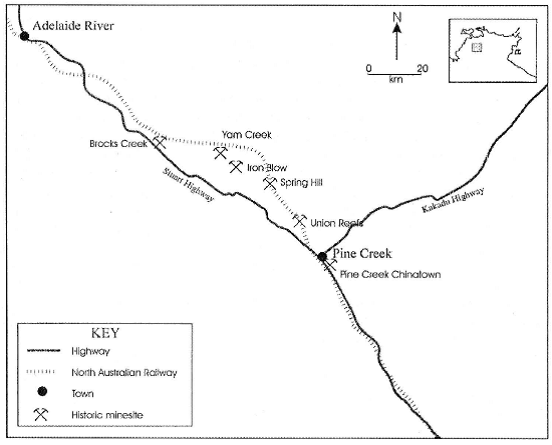 Map of the study area (published in Australian Archaeology 48:23).

Historians have lamented the scope and quality of the documentary evidence which is available concerning early Chinese activities in the Northern Territory (e.g. Bell 1989:4; Giese 1995:24; Jones 1990:xi; Tamblyn 1990:74). Thousands of Chinese sojourners flocked to the gold fields in the Pine Creek region of the Northern Territory, 200 km south of Darwin, during the 1870s and 1880s. Although they formed most of the non-Aboriginal population of the Territory until 1911, virtually all of the written records of their activities were made by Europeans (Mitchell 1995a:6–7). Those who wrote these accounts were typically apathetic, patronising or more frequently openly hostile to the Chinese. As a result, the calibre of written evidence concerning a whole range of Chinese activities, including their dietary practices, is indifferent at best.

Mitchell, S.
Dog's dinner? Archaeological evidence for meat consumption on Chinese historic sites in the Pine Creek region
June 1999
48
23–28
Article
You must be a member to download the attachment ( Login / Sign up )