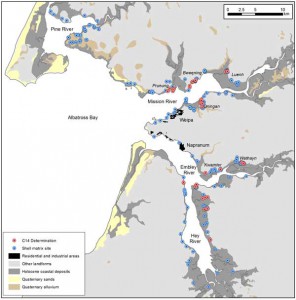 Shell mound sites dating from the mid-Holocene and containing very large numbers of the estuarine bivalve Anadara granosa are found across northern Australia. It has recently been proposed that the economic, social and cultural practices linked to their formation ceased some 500–700 years ago across northern Australia as a result of environmental changes leading to the substantially reduced availability of A. granosa. This has been used in support of arguments that ethnographic data are irrelevant to archaeological interpretations of shell mound sites. The Albatross Bay region, Cape York Peninsula, has been cited as one area potentially showing a continuity of mound building after 500–700 cal. BP; however, radiocarbon data for the region have not been reviewed in the context of this debate. This paper reviews both new and previously published radiocarbon determinations from shell matrix sites at Albatross Bay and integrates these with newly available site data for the region. Analysis of this dataset shows a dramatic increase in mound construction activity during the last millennium, continuing up until ca 200 cal. BP. This shows that shell mound construction did not universally cease across northern Australia at 500–700 cal. BP. This paper calls for further refinement of the broader model via the development of more nuanced, regionally specific models.

This article includes online supplementary material that is freely available.