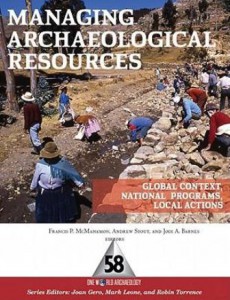 This book comprises a very interesting set of often excellent chapters, in search of an organising theme. In their introduction, the editors propose that the chapters collectively explore aspects of ‘the liberals’ dilemma’ – expressed archaeologically in ‘the contradictions that might arise in the practice of an archaeology that works toward including local ‘voice’ on one hand and adherence to professional standards of archaeological practice on the other’ (p.19). This reviewer, however, could not find this dilemma very explicitly posed, or even, seemingly, regarded as a dilemma, by any of the chapter authors. This was something of a disappointment, because I think the issue is a real one – if not, perhaps, as big an issue as the editors’ emphasis on it suggests. Be this as it may, the volume has much to recommend it.

Chapter 1 by Sharon Sullivan, Nicholas Hall and Shelley Greer, describes a suite of programmes in Australia designed to train members of Aboriginal communities in exercising custodianship toward physical aspects of their cultural heritage; that is, in managing cultural places and controlling impacts on them. Notable among the initiatives described is the Australian Heritage Commission’s Protecting Heritage Places Information and Resource Kit, a tool for use by communities and others aspiring to protect and manage some aspect of their heritage. Built around a (probably deceptively) simple 10-step process, the kit has served to structure training and planning throughout the country. With reference to the ‘liberals’ dilemma’ that troubles the editors, it is interesting to note that Sullivan and her colleagues see one of the values of the programmes they describe as being ‘to demystify professional approaches to heritage conservation’ (p.52) – without, apparently, diluting their professional quality. They acknowledge evolution in their own approaches, informed by the Aboriginal worldview of ‘managing country and special places within it [as] a two-way interaction between people and country’ (pp.52-53), but they seem to find this a positive experience, not one posing an existential dilemma.

Chapter 2 by Babatunde Aghaje-Williams, presents a thoughtful Nigerian perspective on ‘cultural resource management’, emphasising the need to define the field more broadly and ‘culturally’ than simply as an aspect of archaeology. The narrowly archaeological American model to which Aghaje-Williams objects has become a rather obsolete one since publication of the sources on which he relies, but that doesn’t lessen the force of his argument; ‘cultural resource management’ really ought to have something to do with culture, not just its dead leavings.

Chapter 3 by Penny English, focuses on the European Union (EU), Article 151 of the European Community Treaty, and the difficulties inherent in trying to forge a European identity while respecting both national and subnational (regional, local, ethnic) identities, particularly where matters of cultural heritage (however defined) are involved. She notes that the effort has had the unintended but hardly unwelcome consequence of allowing ‘the emergence of reinvigorated regional identities’ (p.83).

Chapter 4 takes us back to Africa, with McEdward Murimbika and Bhekinkosi Moyo revealing the crisis of heritage management that accompanies Zimbabwe’s political, economic and social turmoil. They hold out the hope that archaeology throughout sub-Saharan Africa – and one assumes, the broader sort of heritage management called for by Aghaje-Williams – can actually mobilise support for and play a positive role in national development, but only if ways are found to make it meaningful to, and involve, local communities.

Chapter 5 skips across the seas to bicultural New Zealand, where Ian Barber discusses the evolution and interpretation of the Historic Places Act 1993. The statute he says, ‘privilege(s) a disciplinary emphasis on the values of archaeological discovery and recovery, while encouraging the … concept that a site is not lost if it can be preserved in records’ (p.123) – a problem of archaeo-privilege that affected communities the world over rail against.

Chapter 6 by David M. Browne, is about the efforts of the Royal Commission on the Ancient and Historical Monuments of Wales to relate to the ancient landscapes of Wales on the one hand and to the needs and concerns of its contemporary people on the other. I was intrigued by his reference to the ‘painful changes in mind sets’ (p.137) that these efforts have entailed. There must be more of a story here than could be revealed in Browne’s short chapter, which does not seem to express much pain.

Chapter 7 is an interesting description of archaeology conducted in the context of a regional programme with national support. Andy J. Howard, Mark H. Whyman, Keith Challis and Kay McManus discuss how the Vale of York Visibility Study has tapped into the United Kingdom’s Aggregates Levy Sustainability Fund to finance a comprehensive regional study and channel its results to stakeholders. One wonders, though, if all the stakeholders are as satisfied as the authors seem to be with the programme’s emphasis on archaeological research as opposed to other imaginable resource management priorities.

Chapter 8 by Marko L. Stokin, Matjaž Novšak and Ana Plestenjak, is to this reader a refreshingly straightforward look at archaeology in environmental impact assessment and planning. Using Slovenia as a case study of a nation in political and economic transition, they write about the problems of finding and addressing ancient sites in development project planning, the integration of archaeology into more general planning schemes, and an innovative system for the virtual capture and presentation of data. Chapter 9 by Julian D. Richards takes us back to the United Kingdom and outlines the important work of the Archaeology Data Service. This service, operated by a consortium of universities and government bodies, seeks to rescue, organise, and preserve the vast archives of paper and digital data – something that most of us (archaeologists and governments alike) tend to ignore to posterity’s loss.

Chapter 10 by Christopher Judge recounts the impressive record of the South Carolina (USA) Heritage Trust in the acquisition and management of archaeological sites that otherwise might be lost to development and other forces of destruction. Toward the end of the chapter, though, he reveals that priorities have shifted within the state’s department of natural resources toward the acquisition of large contiguous areas such as river corridors and working forests, which he feels will work to the detriment of archaeological site protection.

Chapter 11 by Lynn M. Alex, concerns the work of the Iowa Office of the State Archaeologist (USA). Iowa is a good-sized Midwestern state whose land is largely privately owned. Alex emphasises the importance of reaching out to people in all walks of life, through the educational system and otherwise, to encourage responsible attitudes toward archaeology.

Chapter 12 by Cara Lee Blume of Delaware (USA), is the only chapter I found that actually touched on the ‘liberals’ dilemma’, without explicitly acknowledging it as such. The chapter recounts the education that Blume and her colleagues in the state’s Division of Parks and Recreation have received over the years in relating, as archaeologists and land managers, to the interests of Native Americans. Confronted as she wrote the chapter with the proposition that collections not being used for research or interpretation should be returned to the ground, Blume acknowledges her discomfort with the idea, but realistically calls for continued discussions.

Chapter 13 is, as it were, something of an odd duck among the other chapters, dealing as it does not with a particular nation or region or with the relationships of different stakeholders to the archaeological record, but with a general kind of site in a particular kind of environment. Heather Gill-Robinson is concerned about wetlands and the data – both archaeological and palaeoenvironmental – they contain. She discusses the special preservation qualities of wetland sites, the natural and anthropogenic forces that threaten them, and a variety of management strategies.

Chapter 14 by Mary S. Carroll, returns to the subject of Chapter 9 – the capture, organisation and preservation of data. Where Julian Richards focused in detail on the work of a single programme – the United Kingdom’s Archaeology Data Service – Carroll paints with a somewhat broader brush, discussing programmes in both the United Kingdom and the United States and outlining a range of technical, institutional, and practical issues in addressing the problem.

Chapter 15 by Sergio J. Chávez, is a superb paper that should be read by anyone contemplating an archaeological project involving – or just carried out in – a community. It describes the long-term project that Chávez and his colleagues have overseen at Ch’isi and elsewhere in the neighborhood of Copacabana, Bolivia. In clear, unpretentious language it outlines the way their relations with the local community have evolved. Starting from a condition in which the community provided laborers who just did what they were told, Chávez recounts a transition to one in which the community has taken ownership of and responsibility for the Ch’isi temple site, begun developing plans for other heritage management projects, and along the way enhanced its residents’ educational situation, restructured attitudes toward women and their work, and developed critical infrastructure. Chávez and his colleagues have obviously invested a tremendous amount of their own resources, and themselves, in the project and its people, and he does not shrink from (but also does not belabor) the difficulties and obstacles they have faced, but they seem to have developed a model programme that should be carefully examined by archaeologists and government heritage authorities alike, not just in Bolivia but worldwide.

Chapter 16 by Maria Isabel Correa Kanan and Rossano Lopes Bastos, concludes the volume with a discussion of collaborative archaeological management in Brazil. The rock art of Campeche Island and the massive coastal shell midden sites of Santa Catarina State are used as case studies. The authors begin with an outline of archaeological heritage management’s evolution in Brazil, emphasising the developing role of the Instituto do Patrimonio Historico e Artistico Nacional (IPHAN). Like other such national government bodies in Latin America and elsewhere, IPHAN seems to be going through a perhaps painful transition from merely registering elements of patrimony and expecting them to be left alone except when subjected to research or modification by government, toward more active and creative forms of preservation planning and management. Predictably and creditably, IPHAN’s efforts involve increasing engagement with local communities, with public education, and with the overall national and state legal-political systems. In the case of the Campeche Island petroglyph sites, a management plan has been developed that stresses partnerships, education, and regular interaction with interested parties. Evolving management planning for the shell middens reasonably appears to emphasise state/national coordination and addressing midden management in the context of the overall environment.