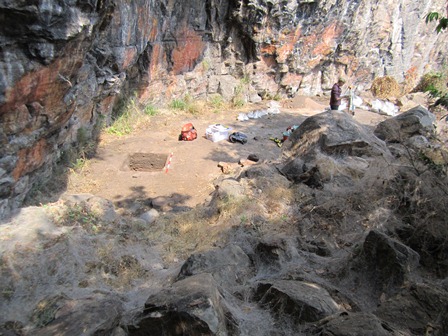 Recent excavations at the Birriwilk rockshelter in Mikinj Valley, southwest Arnhem Land, have revealed evidence for mid- to late Holocene settlement, including a major period of site use in the last millennium. The site is important to the traditional owners, with a rich oral tradition associated with ‘Birriwilk’, an ancestor of the Urningangk tribe, who is depicted in rock art at the site. Oral traditions link Birriwilk with an adjacent lagoon, as well as a number of other rock art sites and features in the landscape, including the renowned Ubirr complex. The Birriwilk site and vicinity are significant places to the Nayinggul family, traditional owners for the Manilikarr estate. This post-fieldwork report  summarises key archaeological findings at Birriwilk, using frequencies of stone artefacts and faunal remains as proxies of occupation from ca 5000 years ago. The most intense occupation occurred within the last 700 years, a period characterised by foraging and hunting in adjacent wetland habitats, changing technological emphasis to the manufacture of bifacial quartzite points, increased artefact discard rates and increased ochre grinding. The site has little archaeological evidence of use during the last 200 years, although oral histories indicate it was visited regularly until the mid-twentieth century. The rockshelter remains an important story site today.