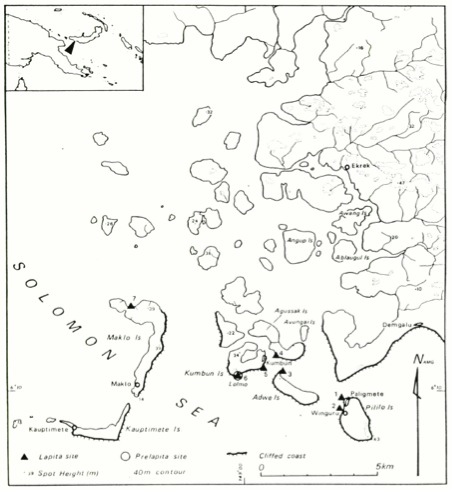 The archaeological investigations in the Arawe Islands off the south coast of West New Britain carried out at the end of 1989 and the beginning of this year form the continuation of a project initiated in 1985 as part of the Lapita Homeland Project. Over three seasons of fieldwork we have built up a picture of the archaeological record over the last 6000 years, which can be combined and contrasted with information gained through interview and mapping of the form of society existing in the last hundred years. The results and finds from our latest season of work add considerably to our knowledge of the sequences of material culture in the area and the formation processes of the archaeological record. Our present excavations have also revealed a whole series of deposits with preserved organic remains which were hitherto unexpected and add a new dimension to our understanding of prehistoric subsistence. Because of the unexpected nature of some of these finds it appeared to us that rapid, preliminary publication of the results was worthwhile.