A study of palaeohealth in precontact coastal Papua New Guinea 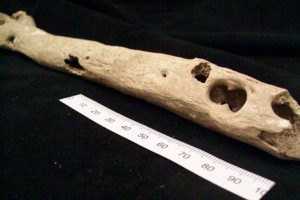 Osteomyelitic infection with multiple cloacae on the right humerus of Individual M37 from Motupore Island (image courtesy of Georgia Stannard).

This thesis aimed to compare the palaeohealth status of two contemporaneous, pre-European Papua New Guinean skeletal samples from Motupore Island (n=56) and the inland site of Nebira 4 (n=39). The data for the Motupore Island sample was collected by the author, while the comparative dataset derives, for the most part, from Pietrusewsky (1976). Both datasets were used comparatively in exploring the variation in palaeohealth between the two samples.

An assessment was made concerning the degree to which a number of variables influenced the palaeohealth of the two samples, including the environmental and ecological settings of the two sites, the varying subsistence economies of the two communities, and cultural affiliations. Palaeohealth indicators addressed in this study can be broadly grouped into oral health, physiological stress and infectious disease variables.

The overall palaeohealth of the two samples varied considerably, with individuals from Motupore Island displaying both the greatest frequency and diversity of pathological lesions (39/56, 69.6%). The sample from Nebira 4 (17/39, 43.6%), while not displaying as much pathology, exhibited larger frequencies of cribra orbitalia, linear enamel hypoplasia and porotic hyperostosis. The variation in access to food, water and other resources, in addition to geographical and cultural modifiers on malarial vector influence, seem to be the primary factors responsible for the health differential between these samples.