A reinvestigation of the archaeology of Geosurveys Hill, northern Simpson Desert 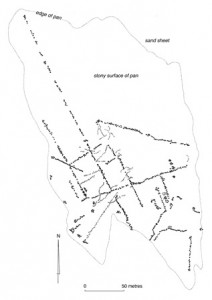 In October 1962 Norman Tindale was flown to the Geosurveys Hill area, deep in the Simpson dunefield (Figure 1), to follow up reports of prehistoric occupation exposed on interdunal pans in the area (Anon. 1962). Tindale, then at the South Australian Museum, had been invited to make the trip by Reg Sprigg, managing director of Geosurveys of Australia Ltd, one of several companies prospecting the Simpson Desert for oil and gas in the 1960s (Sprigg 1993). Geosurveys staff had noticed that ‘long lines of stones on a claypan disappear under sand hills’ (Sprigg 1993). Left alone in the desert in the late afternoon, Tindale, then nearly 62, was a hardy, self-reliant field archaeologist: ‘I took stock of my camp,’ he wrote in his journal, ‘got together some firewood against the night, chose a place to sleep and then made a hasty reconnaissance of the claypan.’ Later he ‘fed on chops grilled in ashes, made tea and then with a flashlight searched for and found stone implements … on the claypan’ (Tindale 1962:7). Although he had planned for several days of fieldwork, Tindale only had a few hours of daylight in the area as the plane returned the next morning to collect him before impending rain made local pans too soft to land on.

Image caption: Stone arrangements of varying age (published in Australian Archaeology 64:52).
Mike A. Smith and June Ross
A reinvestigation of the archaeology of Geosurveys Hill, northern Simpson Desert
June 2007
64
50-52
Short Report
You must be a member to download the attachment ( Login / Sign up )