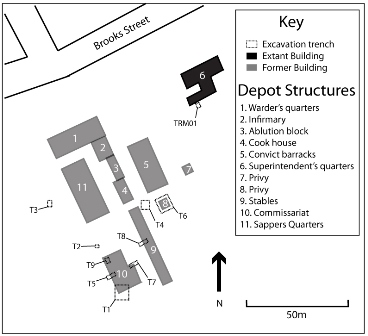 Convict depots inhabited between 1850 and 1875 were excavated in the Western Australian regional towns of York and Toodyay. The project examines the regional characteristics of the convict system through the evidence of lifeways of the depots’ inhabitants. Excavations at York recorded four depot structures: the commissariat, stables, a previously unknown privy, and the extant Superintendent’s building. Excavations at Toodyay recorded seven depot structures: the convict barracks, hospital, kitchen, Warder’s quarters, privy, Superintendent’s quarters and commissariat. A range of structural styles and techniques were recorded, the result of limited supervision of a constantly changing convict workforce with variable skill levels. At both sites less than 30% of the total contexts and approximately 10% of the deposits could be confidently attributed to the convict-era.