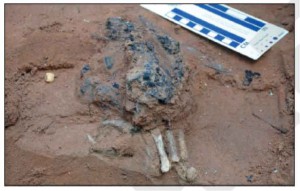 Detailed view of in situ carpal bones, with the hearth above
the hands (published in Australian Archaeology 79).

In 2011 a burial was disturbed during work in Salisbury, a northern suburb of Adelaide, South Australia (SA). Subsequent archaeological excavation revealed a male human interment in a deep alluvial context with a number of unusual characteristics, including a bone point and several ‘binding’ hearths. A sample of femoral bone was submitted for AMS radiocarbon dating and bone collagen stable carbon and nitrogen isotope analysis. Dating determined that the burial was relatively recent (380±30 BP), contemporary with proposed shifts in the Kaurna’s economic systems when ‘mound sites’ were inhabited, that is, over the past 1500 years. Stable isotope results indicated the individual consumed a distinct diet based on terrestrial foods, with an absence of marine protein. The location, mode and stratigraphic context of the burial, coupled with the stable isotope results, suggest this individual had a different diet to contemporary Kaurna men. The ethnographic record and knowledge provided by traditional owners suggested that his diet may have been connected to his status and position within Kaurna society as a ‘medicine man’ or ‘sorcerer’.

Owen, T.D. and F.D. Pate
A Kaurna burial, Salisbury, South Australia: Further evidence for complex late Holocene Aboriginal social systems in the Adelaide region
December 2014
79
Article
You must be a member to download the attachment ( Login / Sign up )