A dingo burial from the Arnhem Land Plateau 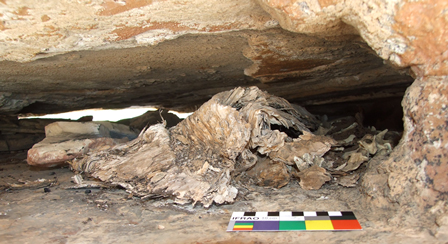 The skeleton of a mature dingo was found wrapped in paperbark and cached on a ledge in a rockshelter on the Arnhem Land plateau. Such burials have not previously been recorded from the region and are considered uncommon by contemporary Jawoyn elders. Radiocarbon dating of a vertebra from the skeleton provided a conventional radiocarbon age of 77±35 BP. This finding is discussed in relation to other recorded aspects of the dingo’s relationship with humans in the ethnography and also its presentation in the rock art of Arnhem Land and elsewhere in Australia.