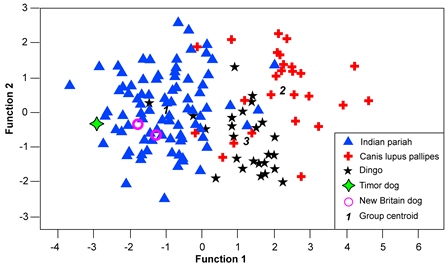 The domestic dog (Canis familiaris) is considered to be the oldest domesticated animal in the world. It arrived in Island Southeast Asia and Australia-New Guinea relatively late in the Holocene, though the timing and means of its dispersal remain unclear. We report a dog burial from Timor-Leste dated to ~3000 cal. BP. Morphometric analysis demonstrates strong affinities between this dog and contemporary domestic dog groups, and particularly with the ‘village dog’ type, indicating it was indeed domesticated, rather than feral-wild. Isotope values which indicate a diet dominated by terrestrial plant foods rather than hunted foods suggest an association between the Timor dog and agriculturalists. Results suggest that the range expansion of C. familiaris in the Indo-Pacific is associated with the dispersal of farming groups in prehistory.

Antonio Gonzalez, Geoff Clark, Sue O’Connor and Lisa Matisoo-Smith
A 3000 year old dog burial in Timor-Leste
June 2013
76
13-20
Article
You must be a member to download the attachment ( Login / Sign up )