Review of ‘After Caption Cook: The Archaeology of the Recent Indigenous Past in Australia’ edited by Rodney Harrison and Christine Williamso 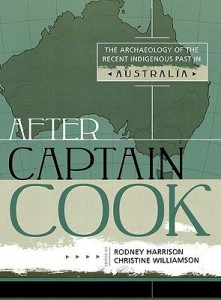 These papers contribute significantly to Australia’s archaeology and history. Our recent black-white past, here viewed as a single continuum of all inhabitants of the continent. is investigated by a battery of techniques loosely termed archaeological. Camp-sites once thought archaeologically adulterated by the presence of wire, corrugated iron or bottle glass. mythic and story sites without stone tools, roo bones or camp-fires, European paintings of Aborigines, an abandoned white out-station taken over by native Tasmanians all have their rightful place here. Building on the ground-breaking Aboriginal oral histories from the 1970s on, and fuelled by joint needs of native title legislation and heritage management, these exciting field projects demonstrate the need for extensive Aboriginal informant input in the field, mapping places embodying their own values, especially where surface indications are ephemeral or intangible. Several of the field projects (the Kimberley, north Cape York, Qld, NE NSW) concern the parts of Australia where the oral tradition survives: Byrne usefully tackles the time-gap situation in south-east Australia.

Case studies cover a huge spatial range. Harrison’s keynote paper concerns the Kimberley pastoral industry in WA and NSW. His theme is the integration of oral historical and spatial exploration of places valued by Aborigines after white contact, often incorporating its experiences. For Macintyre Tamwoy, writing of northern Cape York, the social significance of sites, the shared Aboriginal-white Australian heritage, and how white settlers benefited from inter-racial exchanges are major concerns. For Godwin and L’Oste-Brown, listing Aboriginal places in the Bowen Basin (Central Queensland) as an archaeological sites-only project grew into the comprehensive mapping of Aboriginal cultural places with a continuum of values. They discuss problems of post-contact sites: most of the places they documented have no or only a limited material culture dimension that could be investigated using standard archaeological methods. Like other contributors they stress that effective cultural heritage management of Indigenous post-contact sites must explore the interplay between archaeology, anthropology and history.

In south eastern Australia integrated post-contact archaeology and oral history presents a greater challenge. Byrne wants post-contact archaeology to repair the separation of Aborigines from their own past brought about in part by older-style Australian archaeology. Professional failure to list post-contact sites effectively has contributed to the public perception of an Aboriginal occupation hiatus after 1788. Byrne sees the problem as one caused not by history, rather by the imbalance of heritage site listing: he stresses the need to list intangible places and dynamic aspects of attachment to place.

Re-asserting values and identities in post-contact communities by non-invasive research is another priority. Lydon’s sensitive analysis of Charles Walters Coranderrk mission photographs needs extension to other photographic collections. Remote techniques were used to record the Ebenezer mission cemetery (Vic) so as to maintain its considerable social values (Brown-Avery-Goulding). Ground penetrating radar, a re-establishment survey from the 1904 plan, a ground magnetic survey and investigation of micro-topography and surface vegetation were added to the usual documentary and oral history. Further options not used included metal detection and archaeological excavation. All techniques other than GPR were considered effective.

Asa Ferrier used Swedish sources to discuss the Mjoberg ethnographic collections from North Queensland in a useful study. Williamson’s paper on the presumed Aboriginal presence at Burghley (Tasmania) presents distributions of faunal debris, recycled glass and musketry items over this small abandoned European outpost: similarities to distributions at Wybalenna on Flinders Island (1835–1847) appear striking, especially in the post-Robinson years during which evidence of European civilising activities was noticeably minimal. Proper assessment will have to await the missing Burghley data.

Problems? One or two, partly explained in the Introduction. Citations sometimes appear prepared in haste, detracting from the volume’s usefulness. The editorial style seems heavy-handed in 2004, few thinking Australians today question the multi-voice character of their archaeology, history and heritage. The ubiquitous plague of single quotation marks is remarkably irritating. Here it camouflages an urgent need to re-structure consistent definitions in these currently vigorous archaeological areas perhaps a topic for a future AA conference. The papers presented here range from more document-based archaeological studies of post-contact sites to those incorporating a much larger oral informant component. Both transform traditional archaeological near-anonymity in seeking to identify specific places, sites and events of the recent past, with oral information often critical in the recovery of individual identities, personal histories. myth, story and above all values. For a comparable shift in balance back in the 1970s the innovative Richard Gould used the term living archaeology, one that might usefully be considered for revival.

Birmingham, J.
Review of ‘After Caption Cook: The Archaeology of the Recent Indigenous Past in Australia’ edited by Rodney Harrison and Christine Williamso
2004
58
52
Book Reviews
Download
You must be a member to download the attachment ( Login / Sign up )