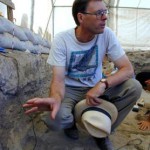 “The leopard changes its spots: The sequence at Çatalhöyük”

In this lecture Prof. Ian Hodder will discuss recent research that shows major change through the occupation sequence at Neolithic Çatalhöyük East in central Turkey. The sequence of occupation in the 7th millennium BCE has often been described as stable and only slowly changing, but recent research has shown that there was continual and marked change in all aspects of the evidence. The talk will integrate specialist information from a large number of archaeological sub-disciplines in order to build a picture of the changes and why they occurred.

Our speaker: Ian Hodder is one of the world’s leading scholars in archaeology. He was trained at the Institute of Archaeology, University College London and at Cambridge University where he obtained his PhD in 1975. After a brief period teaching at Leeds, he returned to Cambridge where he taught until 1999. During that time he became Professor of Archaeology and was elected a Fellow of the British Academy. In 1999 he moved to teach at Stanford University as Dunlevie Family Professor in the Department of Anthropology and Director of the Stanford Archaeology Center. His main large-scale excavation projects have been at Haddenham in the east of England and at Çatalhöyük in Turkey where he has worked since 1993. He has been awarded the Oscar Montelius Medal by the Swedish Society of Antiquaries, the Huxley Memorial Medal by the Royal Anthropological Institute, has been a Guggenheim Fellow, and has Honorary Doctorates from Bristol and Leiden Unive rsities. His main books include Spatial Analysis in Archaeology (1976 CUP), Symbols in Action (1982 CUP), Reading the Past (1986 CUP), The Domestication of Europe (1990 Blackwell), The Archaeological Process (1999 Blackwell), The Leopard’s Tale: Revealing the Mysteries of Çatalhöyük (2006 Thames and Hudson), Entangled: An Archaeology of the Relationships between Humans and Things (2012 Wiley Blackwell).