Diagnosing our Species: How can we Identify the Skull of Homo Sapiens? 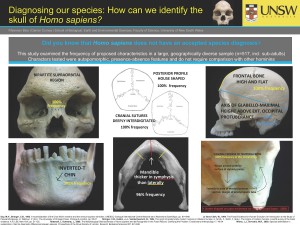 As it stands in biology today, there is no accepted diagnosis of Homo sapiens as a species taxon. Attempts have been made over many decades to address this problem, most notably by Le Gros Clark (1964), Day and Stringer (1982), Stringer, Hublin and Vandermeersch (1984), Trinkaus (2006) and Tattersall and Schwartz (2008). Unfortunately the palaeoanthropology community has not agreed on any of these diagnoses, nor have some of them ever been tested against samples of recent human populations. The aim of this project was to review and critically evaluate previous diagnoses and to assess their utility for diagnosing and identifying members of our species from the fossil record. In particular, this project focused on studying suggested craniofacial autapomorphies. Traits were examined in a diverse range of samples against four criteria: they were putatively autapomorphic, presence/absence, did not require comparison with another hominin’s features for identification, and must not be defined by ambiguous terms such as ‘usually’ or ‘relatively’. For a character to hold potential as a reliable and accurate Homo sapiens diagnostic, the state must be found consistently in samples and must be present in 95% or higher of individuals. Over 450 crania were surveyed which were sourced from populations in Western Europe, India and Melanesia to capture a wide sample of geographic variation. Results will be presented and their implications for diagnosing and defining our species discussed.

Bice, R. and D. Curnoe 2014 Diagnosing our Species: How can we Identify the Skull of Homo Sapiens? Poster Presented at the AAA/ASHA Annual Conference, 1-3 December, Cairns.