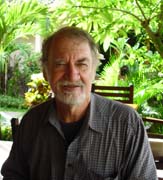 The 2012 Rhys Jones Medal was awarded to Professor Mike Morwood. Mike’s contributions to the development and promotion of archaeology in Australia are multiple, varied and profound. He has played a pivotal role in furthering our appreciation and understanding of Australia’s ancient rock art in Cape York and the Kimberley, and has spearheaded the excavation and analysis of archaeological and fossil hominin sites in Indonesia, which have led to the discoveries of stone tools dating back to a million years ago on the island of Flores and, most famously, the late survival of a new species of diminutive and archaic hominin, Homo floresiensis, dubbed ‘The Hobbit’.

Mike has published over 130 refereed journal articles and book chapters that have amassed over 1300 citations on the Web of Science. He has also written two books in the last decade; one of these—The Discovery of the Hobbit: The Scientific Breakthrough that Changed the Face of Human History (Random House)—received the AAA 2007 John Mulvaney Book Award. In a more rare, but no less important achievement, Mike has also ensured that his research findings are accessible to the general public, by writing articles for popular science magazines, such as National Geographic, and by giving numerous invited public lectures and media interviews and has participated in 15 TV documentaries.

Another feature of Mike’s career has been his passion for mentoring students, particularly giving them the chance to participate in fieldwork. I have personally experienced such an opportunity when I accompanied Mike to his excavations at Quippenburra Cave back in 1986. Through his teaching Mike stirred the imagination of a body of young and enthusiastic students interested in a more scientific, archaeologically-informed approach to the study of rock art, and archaeology in general.

Mike’s passions for research into Aboriginal rock art and human evolution in Southeast Asia are what make him an outstanding scholar in Australian archaeology. Congratulations, Mike, on receiving the 2012 Rhys Jones Medal for Outstanding Contribution to Australian Archaeology.