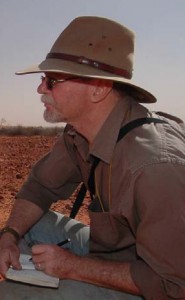 Dr Mike Smith has been awarded the Rhys Jones Medal to mark his enormous contribution to the development and promotion of archaeology in Australia. Mike is currently Director of Research and Development at the National Museum of Australia. For more than 25 years, he has worked in the Central Australian Desert. A distinguished field archaeologist, he pioneered research into late Pleistocene settlement in the Australian desert and over recent years has initiated, planned and conducted a series of international conferences.

Mike’s ground breaking research begun in the 1980s, before which Australian deserts were largely believed to be inhospitable landscapes that remained uninhabited until 12,000 years ago. Mike’s thorough and dedicated research over three decades has demonstrated that the history of Australian deserts is in fact much longer and much more dynamic and varied. The work at Puritjarra helped change views on desert habitation. Mike has worked with multi-disciplinary teams and published papers and books on the timing and settlement of the shelter, the stone tool assemblage, seed grinding, charcoal, rock art, the source of ochres and their relationship to trade, ethnography and impressions of the rockshelter from people in other disciplines. Recently a book making the recent history of the region has been met with popular acclaim: ‘Peopling’ the Cleland Hills: Aboriginal History in western Central Australia, 1850-1980. More broadly, Mike has expanded his research and publications to focus on issues relating to both the technicalities of dating methods and the implications of archaeological dates for understanding the prehistory of Australian and the wider region.

In recent years Mike has led the way in developing an understanding of the environmental histories of deserts and their relationship to cultural change. Seeing the need for the exchange of information across disciplines and across continents, Mike initiated, planned and conducted an international conference series, 230South: The archaeology and environmental history of the Southern Deserts held in Canberra 2003, in Chile in 2005, and set for Namibia in 2008 (see 2005). Two edited volumes arose from these meetings: 230South: Archaeology and Environmental History of the Southern Deserts (with Paul Hesse) and Desert Peoples (with Peter Veth and Peter Hiscock). This conference series has raised the standing of Australian archaeology internationally and has forged strong links between researchers of many nations. These days when global warming is on everyone’s lips, the understanding of human and environmental interactions is vitally important. Recognition of Mike’s unique contribution to research into late Pleistocene archaeology and Quaternary environments in Australia resulted in his recent appointment as Adjunct Professor at CRES at the ANU, and election as a Fellow of the Australian Acaemy of the Humanities.

Mike’s achievements at the National Museum of Australia include the researching and curation of blockbuster exhibitions (eg Tangled Destinies: Land and People in Australia, Extremes:Survival in the great deserts of the Southern Hemisphere), leading the way in educating the general public and disseminating archaeological information in a manner not open to academia.

Mike’s attention to the ‘big questions’ facing archaeology, his ability to turn ideas into research projects, his continued work in the field, his enviable publication record, his elegant prose, his generosity to other researchers, and his passion for the discipline of archaeology make him an ideal recipient of the Rhys Jones Medal.