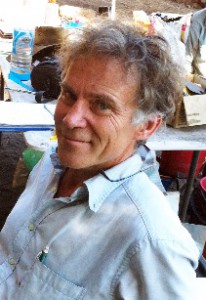 The Bruce Veitch Award for Excellence in Indigenous Engagement 2006

Richard Fullager has been awarded the inaugural Bruce Veitch award for excellence in Indigenous engagement. This award was created to celebrate Bruce’s important contribution to the practice and ethics of archaeology in Australia. It results from contributions by resource companies, consultants and individuals made after Bruce’s death in 2005. The award is presented to an individual or group who has undertaken an archaeological or cultural heritage project which has produced significant outcomes for Indigenous interests.

Richard Fullagar has a long and distinguished career in archaeology spanning the last 30 years which has been centred on working in collaboration with Aboriginal communities. He has always practiced archaeology with a sense of moral and ethical obligation to the people he has worked with and has actively sought to engage with traditional owners on all the projects he has been involved in. His commitment has always been long-term and often has involved significant outcomes for individuals, communities, and for the ethical standing of archaeology in this country.

Three particular projects highlight Richard’s commitment to Aboriginal communities and the manner in which he practices archaeology. First, he has worked with the Miriuwung-Gajerrong and other top-end people since the late 1980s, providing expert witness testimony in their successful native title case. Second, Richard has been a key part of the University of Sydney Riversleigh Archaeology Project, working closely with the Waanyi people in northwest Queensland. He was active in many months of fieldwork, assisted and ran traineeship programs for young community people, and provided expert advice and reports. As many would know, this project often brought community people to Sydney to be a part of the post fieldwork analysis and to attend conferences like AAA. Third, Richard has provided a key leadership role in his work as chair of the AAA Code of Ethics Review Subcommittee.

When he is in the field, as his colleagues would know, Richard is usually responsible for extensive background consultation work. Yet somehow he also manages to spend a lot of time down the pit. He’s the first one up, cooking porridge for people and usually the last one to bed, and still manages to be enthusiastic about the artefacts coming out of the trench on a boiling hot afternoon. His generosity to others in a range of field-based projects has always been selfless.

Richard is well-known for his generosity of heart, opening his home and family to visitors and returning to country where he has worked as often as he is able. Richard is never apologetic about archaeology – he is able to respect and interact with Indigenous worldviews while being passionate about scientific archaeology. He is able to communicate that passion to Indigenous people, as he is able to understand and share something of their passion for the land.