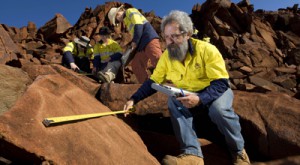 The Bruce Veitch Award for Excellence in Indigenous Engagement 2011

Ken has had a long and significant career—a remarkable career—in archaeology. He is well known now for his outstanding work aimed at protecting rock art on the Burrup Peninsula, but throughout his career Ken has worked closely with Indigenous people from many other regions in Australia.

In the early 1980s, he worked for the Aboriginal Sites Department at the Western Australian Museum, with a team of archaeologists responsible for recording and salvaging sites prior to development. He engaged with engineers and planners to ensure wherever possible the protection of important archaeological features in the face of rapid mining expansion, at a time when cultural heritage protection was a marginal consideration in industrial development.

With the Victoria Archaeological Survey, he developed and delivered training courses for Aboriginal field staff, enhancing their knowledge of archaeology and cultural resource management practices. He then worked with the Northern Land Council where he represented Aboriginal interests in land claims and acquisitions. Next came a position with the Northern Territory Aboriginal Areas Protection Authority documenting sites of significance and recording the social, cultural and geographical contexts of sites and people for relevant Aboriginal groups.

In 2003 he moved to work with Pilbara Iron and more broadly within Rio Tinto, where today he is the Specialist Heritage Advisor for the Burrup.

Those who know Ken will tell you how generous he is with his time and knowledge with students and colleagues, but especially with Indigenous people. His honesty, energy and persistence, combined with his long history of professional and meaningful Indigenous engagement make him an outstanding recipient for the Bruce Veitch Award for Excellence in Indigenous Engagement.