For centuries archaeologists have been fascinated by artefacts, and one particular kind of artefact has been especially critical to our understanding of the human past: these are, of course, stone artefacts or ‘lithics’.

Once regarded with wonder and featuring in folklore as the work of elves or fairies, archaeologists now understand a remarkable amount about the diversity and variation in stone artefacts through time and have developed sophisticated methods to study what they were made from, how they were made and what they were used for. Our theories about the roles stone artefacts (and the individuals who made them) may have played in past societies have increasingly become more refined and nuanced. Overall, this often unassuming class of artefacts is remarkable for the broad range of human behaviours it can help us to understand.

The latest volume of Australian Archaeology features several research articles on the study of stone artefacts. These papers touch on key themes in current research into this class of archaeological materials and highlight the current diversity of lithic studies in Australia. The themes in question include understanding past tool use, understanding how tools were made and their variability, and interpreting the social significance of stone tools beyond a general utilitarian level. 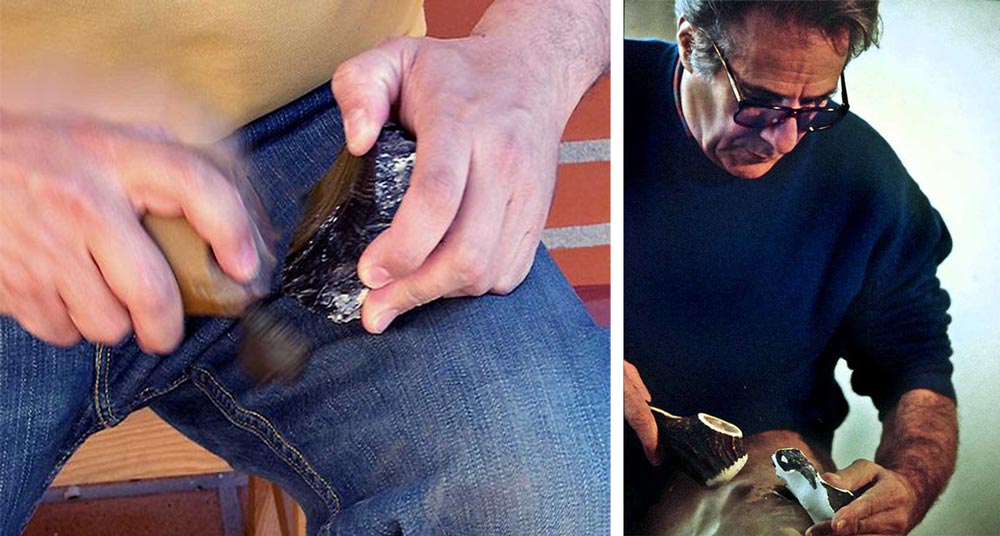 One of the major issues in archaeology is preservation. Understanding the use and management of plant foods can be particularly difficult, given that they do not preserve well except under very specific circumstances (such as in water logged or anaerobic conditions). One way that archaeologists can reconstruct the use of plant foods is by studying the traces of use they left behind on the tools people used to process them (this is called use-wear and residue analysis). A key issue for Australian residue studies is that the coarse-grained materials commonly used to make stone tools in Australia have been argued to make it difficult for researchers to identify any traces of use on them.

In AA77, Laressa Berehowyj tested this issue in relation to the use of tubers (such as yams), which are known to be important foods for Aboriginal people, though their use in the remote past has been difficult to understand owing to the aforementioned preservation issue. In an experimental study, Berehowyj used a range of flakes knapped from common Australian stone types (specifically, silcrete, chert, chalcedony and indurated mudstone) to peel and slice tubers in order to see whether this activity produced any wear on the tools. Using high magnification light microscopy, Berehowyj was able to show that wear was indeed formed on these artefacts. This finding is highly significant as, with more research, it has the potential to allow an understanding of how widespread tuber use and management might have been in the past, without actually needing any preserved tubers. 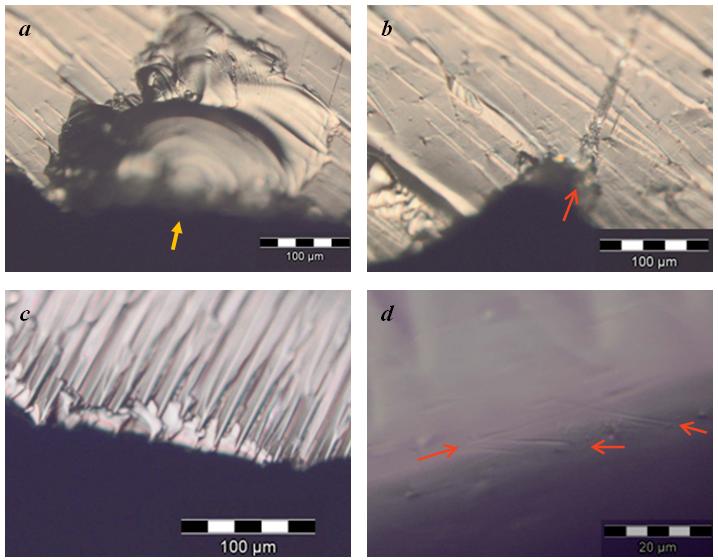 A long-term research interest of archaeologists has been understanding variability in stone artefacts, and more recently a focus on reduction sequences. Lithic technology is a reductive process, i.e. when a core is struck material is taken away from the original mass; it’s because of this that the sequence of actions that knappers (literally, those who break stone) perform from the first blow to the end is termed a reduction sequence. Understanding reduction sequences allows archaeologists to reconstruct the actions of people in the past, to know what tools they were making and how they made them, and can allow insights into important topics for lithics research, such as how people used different stone materials and how people’s mobility affected their tool-making activities.

In the latest volume of AA, Grant Cochrane and colleagues report on their recent research into a specific reduction sequence used to produce blades (i.e. artefacts that are twice as long as they are wide), called burin blade core reduction. This is a specific way of producing blades from a flake core in which the edge of the core is used to guide the blade removal. This research expands our understanding of the variability of these kinds of cores, specifically their size. Burin blade cores are known from a few places around Australia and are generally 8 cm or smaller in size—this has led many to suggest they were used to produce specialised small and narrow blades termed, microblades. What’s interesting about Cochrane et al.’s research in south central Queensland is that they found high proportions of these cores that were substantially larger than the usual size. This means that the commonly known reduction sequence, where people primarily make small blades from these cores, doesn’t always apply: we now have evidence of a reduction sequence in which large AND small blades were being produced. This finding allows archaeologists to understand more about the diverse ways that people applied this technique of making blades, and contributes to our understanding variability in reduction sequences across Australia more broadly. 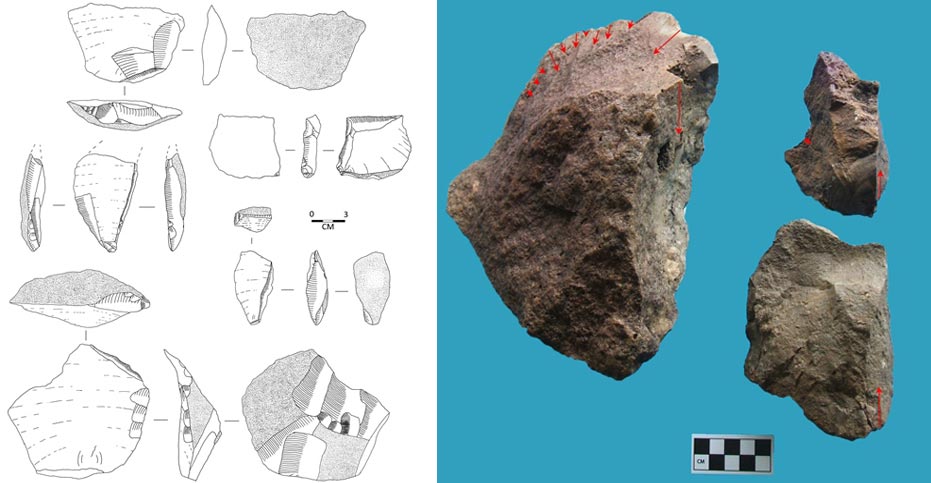 But not all stone tools had prosaic uses, so what do we do with tools that weren’t used for utilitarian tasks such as cutting food? Certain artefacts carried meaning and social significance, but understanding the roles of these objects in the past is one of the biggest challenges facing the contemporary archaeologist.

Recent research in Barema, New Britain, Papua New Guinea (PNG), by Robin Torrence and her colleagues illustrates how archaeologists are coming to understand more about the social life and ideology of people from a poorly known period in PNG, i.e. before ~3300 years BP. The majority of stone artefacts from this time and region are simple, unmodified flakes and don’t afford much insight into social meanings, unlike the rarer, highly worked artefacts such as mortars and pestles and large, retouched obsidian tools. 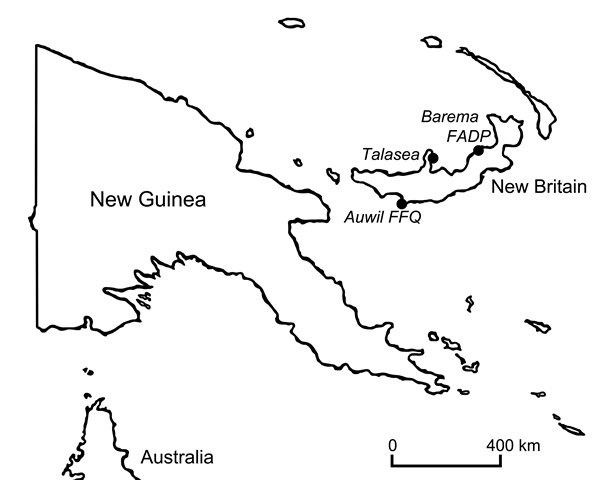 In the Barema site an intact obsidian artefact was found that has a very unusual shape, which allows archaeologists to reconstruct previously identified but broken specimens. These long, thin artefacts are stemmed (i.e. they have a shaped ‘handle’, similar to the stem of a leaf) and have a large hinge termination, which created the smooth curved end. These features give them a distinctive phallic silhouette, which is important as it suggests possible meanings for the makers or uses of the tools. Through conducting preliminary low-powered use-wear and residue studies the researchers were able to show that the tools found at this site had not been used, while replicative experiments demonstrated the high level of experience and expertise required to manufacture this unusual shape. The large and homogeneous obsidian cobbles that would have been required to make these tools are rare; based on previous studies of the obsidian quarries where the raw material was obtained (as determined by portable x-ray fluorescence). The expertly made and delicate nature of these tools with their distinctive phallic shape strongly suggests a significant social and ceremonial role for them—just what that role was is the subject of ongoing research. 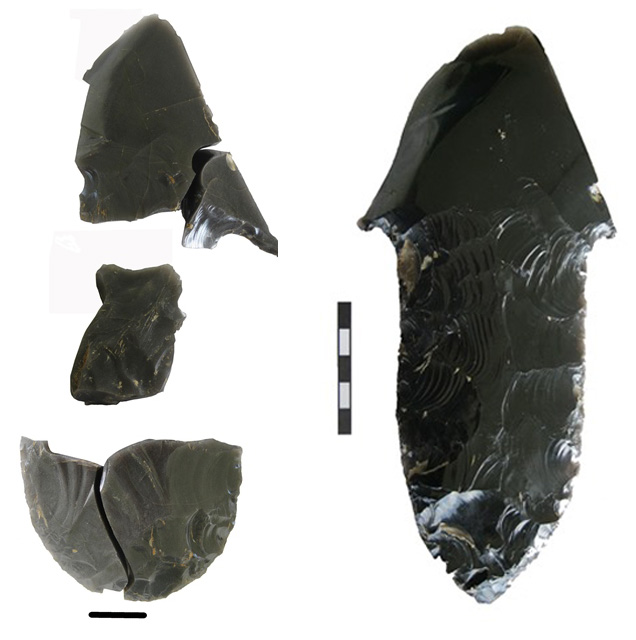 Obviously the cases presented here are just a small subset of the current research being conducted by Australian archaeologists on stone artefacts. This specialist field of study is consistently growing in complexity as we learn more and develop better techniques over time.

For more information on the study of stone artefacts in Australia and across the world:

Clarkson, C. and L. Lamb 2005 Lithics Down Under: Australian Perspectives on Lithic Reduction, Use and Classification. Oxford: Archaeopress.

For more about the recent findings at Barema see the Australian Museum blog post.

Elfshot is the blog of archaeologists Tim Rast, who specialising in artefact replications. This blog documents much of his work replicating past technologies (including stone tools) for museum and teaching collections.

The Rocks Remain is the blog of Dr Rebecca Wragg Sykes who writes about her work researching the stone tools of Neanderthals.

Ancient Craft UK is the website of James Dilley a craftsman and re-enactor (and archaeology student) who specialises in prehistoric technologies. His website contains a lot of information about how to make stone tools.

Making stone tools is now a popular hobby for artists and craftspeople, particularly in America and the UK. There are thousands of videos on YouTube on how to make stone tools. If you’re interested in seeing how stone tools are made (known as knapping or sometimes flintknapping) check out this video on YouTube as a starting point.

For a some interesting video introductions to some of the academic applications of replicative stone knapping check out the following interviews with Bruce Bradley  and Erin Marie Williams.