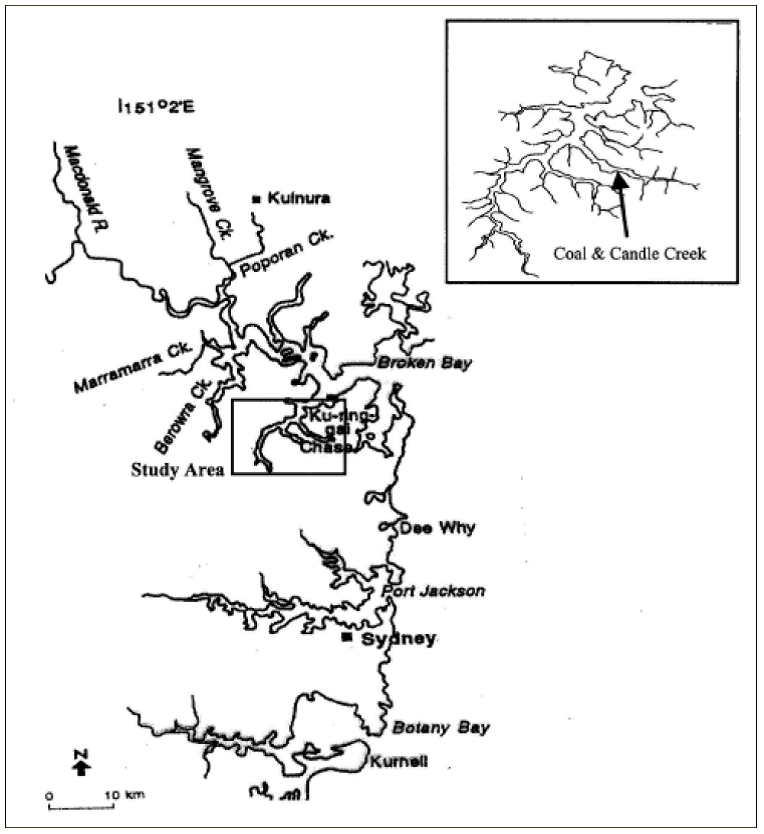 Location of the study area (published in Australian Archaeology 60:18).

A survey of shell midden sites within the Cowan Creek area, which lies to the north of Sydney, was conducted over a period of five months. The survey design was based upon a site location printout obtained from the New South Wales National Parks and Wildlife Service Aboriginal Heritage Information Management System. Due to the ruggedness of the terrain within the area, the sites were first identified from the water, and GPS was used to verify the coordinates. The location of the sites was then confirmed on foot. During the survey potential habitation sites were also examined, and a total of 38 new sites containing middens, were identified and recorded for inclusion on the site register with National Parks. Recorded site density, as a result of the survey, has increased along Coal and Candle Creek from 0.5 sites/linear km, to 8.5 sites/linear km. Surface examinations of the midden deposits in this area suggest that Trichomya hirsuta and Crassostrea commercialis were strongly favoured by Aboriginal people in the past. The results of the survey indicate that the waterbased survey method adopted for the purposes of this project was highly efficient in the location of sites containing middens in Cowan Creek, within a short period of time. The results also indicate that a great deal of this information is being rapidly degraded within the area, with the majority of sites displaying damage due to both natural and anthropogenic influence, despite the protection afforded by inclusion of all of these sites within a National Park.

Guthrie, S. and J.L. Kohen
Water views: Water-based survey methods on Cowan Creek, New South Wales
2005
60
16–23
Article
You must be a member to download the attachment ( Login / Sign up )