Trampling through the Pleistocene: Does taphonomy matter at Cuddie Springs? 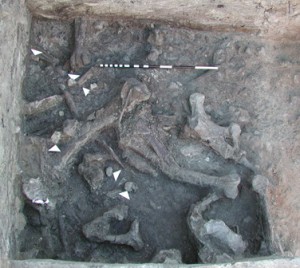 After 15 years of continuing investigation, analysis and publication of the sedimentary sequence at Cuddie Springs, the site and its contents continue to draw considerable attention from those investigating the timing and cause of the extinction of the megafauna. The archaeological record commences at Cuddie Springs around 36 ka and overlaps with a record of a handful of megafauna species for up to 10,000 years. The main issue for those supporting the popularly cited 46 ka terminal extinction date for megafauna are the ‘young’ dates for this site. Arguments have also been forwarded suggesting the sediments are reworked, that artefacts are intrusive in the megafaunal-bearing layers or that material has been redeposited in the claypan deposits as river bedload. These issues relate primarily to taphonomy, in particular site formation processes. However, interdisciplinary studies have shown that Cuddie Springs is an ephemeral lake in a landscape of low relief and within its sediments is preserved a highly-stratified record of environment, fauna and humans that has formed over many millennia. Rather than an incoherent mix of material from multiple sources, the data point to an intact accumulation of fossil fauna which, in the upper layers, co-occurs with an archaeological record of human occupation.

Image caption: Photograph of the base of SU6B in Square E10 at Cuddie Springs (published in Australian Archaeology 63:18).
Judith H. Field
Trampling through the Pleistocene: Does taphonomy matter at Cuddie Springs?
2006
63
9-20
Article
You must be a member to download the attachment ( Login / Sign up )