Thy Thylacoleo is a thylacine 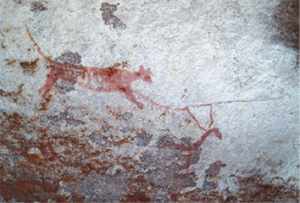 In 2009 two Kimberley rock art paintings were reported as representing Australia’s extinct marsupial lion, Thylacoleo carnifex (Akerman 2009; Akerman and Willing 2009). The first painting was re-examined and confirmed as a representation of Thylacoleo (Woodhouse 2012). Some researchers now refer to the presence of Thylacoleo in Kimberley rock art to support further theories about northern Australian rock art and prehistoric events. This paper argues the case that both paintings represent the thylacine (Thylacinus cynocephalus, Tasmanian tiger) and not Thylacoleo. Distinctive attributes of the thylacine, present in both paintings, are described. Thylacine paintings are common in the Kimberley and appear in a variety of shapes, sizes, postures and artistic styles. Neither painting is from the Pleistocene; the first is superimposed over earlier human figures, and, stylistically, neither belongs to the Archaic Period in the Kimberley rock art sequence. Thylacines became extinct on mainland Australia following the arrival of the dingo approximately 3500 years ago (Paddle 2000:20), while Thylacoleo is argued to have become extinct approximately 46,000 years ago (Roberts et al. 2001).