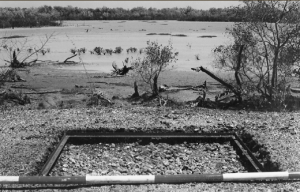 Many hundreds of Aboriginal shell mounds exist on the northern coasts of Australia. Though these archaeological features increasingly figure in broad constructions of past coastal hunter-gatherer economies, few have been analysed in any detail. This paper describes the excavation and analysis of three Anadara-dominated shell mounds situated in adjacent microenvironments at Hope Inlet, Shoal Bay near Darwin on the Northern Territory coast. These stratified deposits, formed over some 15 centuries between about 2000 and 500 years BP, provide a relatively fine grained record of subsistence and settlement strategies of hunter-gatherer peoples during this Late Holocene period. This study finds that these North Australian coastal groups practiced not a specialised marine or maritime subsistence economy focused on offshore resources, but a generalised and flexible coastal subsistence economy tied to the land.

Bourke, P.M.
Three Aboriginal shell mounds at Hope Inlet: Evidence for coastal, nor maritime Late Holocene economies on the Beagle Gulf mainland, northern Australia
2004
59
10–22
Article
You must be a member to download the attachment ( Login / Sign up )