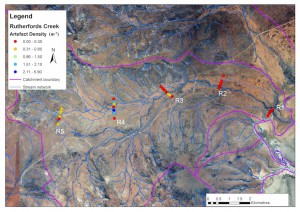 In western NSW surface exposures of stone artefacts (open sites) and heat retainer hearths are common. A large recorded stone artefact assemblage (over 27,000 stone artefacts) and assemblage of heat retainer hearths (over 90 hearths) from surface deposits in the Rutherfords Creek catchment in western NSW was used to test whether water availability did have an impact on assemblage composition and therefore past Aboriginal behaviour. Spatial autocorrelation and one-way ANOVA was used to test the geographical location against a range of assemblage attributes, including artefact density, tool type flake to core ratio and flake to tool ratio, for 97 sample areas spread across the valley floor of Rutherfords Creek. Across the valley floor there were no consistent differences in assemblage composition that indicated a settlement system based on distance from the lake was operating within the single catchment.

The second part of this research examined the surface record at a larger spatial scale. Transect surveys across seven catchments in the Peery section of the Paroo Darling National Park, including the Rutherfords Creek catchment, were used to record artefact presence/absence and density, as well as a range of environmental variables, including dominant geomorphic process, surface visibility, distance from water and landform unit. Statistical tests were used to investigate the relationship between artefact density, commonly recorded in CHM surveys, and the different environmental parameters within and across the catchments. While there was a relationship between some of the variables, particularly the dominant geomorphic process (deposition, erosion or residual), overall none of these variables could account for the current distribution of stone artefacts across the catchments surveyed.