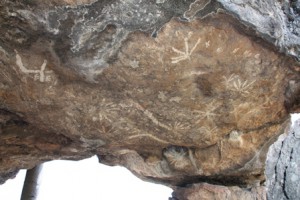 The study of rock art in Australia has evolved over the past century, growing from initial attempts to place rock art motifs into pan-Australian chronologies based on style, to a diversified field of research that draws on a wide range of sources. Rock art motifs encode messages about many different aspects of the people that produced the symbols. Not only are the motifs a glimpse into the landscape of past human thought, they also serve as markers of past socio-cultural landscapes, as well as often serving as demarcations of the actual physical territories of the groups that produced them. The rock art symbols encode information about past group dynamics as well as prior economic, social, spiritual and territorial contexts.

This thesis concentrates on the rock art of the Chillagoe-Mungana area in north Queensland, a rock art zone that encompasses over 41 individual sites and 800 motifs. It examines the Chillagoe assemblage using three current approaches to rock art research in Australia. First, by investigating the relationship between rock art production and ritual activities, this thesis suggests that the motifs of the Chillagoe district may have been produced in association with formalised, ceremonial activities, rather than in more general habitation contexts. Second, the information exchange model is applied to the rock art motifs across the entire district, and this thesis asserts that the Chillagoe-Mungana limestone belt may have been a shared boundary for the four local Indigenous groups of the area in the mid-to-late Holocene. The Chillagoe-Mungana limestone belt may have served as an area that promoted group cohesion, cooperation and bonding, as is evidenced by the rock art motifs. Finally, this thesis explores a more regional perspective, focusing on issues of trade and exchange. The Chillagoe-Mungana district appears to be part of a wider semi-arid social network that stretches through the interior of Queensland, with the rock art motifs of Chillagoe exhibiting close cultural ties with areas of western Queensland, such as Mt Isa and Lawn Hill. Trade and exchange were an important aspect of this broader regional network. This thesis suggests that the presence of seven baler shell stencils in Spatial Cavern B of the Walkunders complex in Chillagoe may serve as an indication of the movement of baler shells, a common trade good of Aboriginal people, through the Chillagoe district, a trade route that is currently unknown by any other ethnographic, historical or archaeological source. The occurrence of baler shell stencils in the Chillagoe area suggests that the current models of the passage of trade goods through Queensland may need to be extended further inland than previously thought.

This thesis also strives to be a summary of many of the diverse projects that have been undertaken in the Chillagoe-Mungana area, as well as to suggest some possible directions for future research.

Image caption: Rock art on the ceiling of the Castle Rock Site, Chillagoe, Queensland (image courtesy of Nicola Winn).
Nicola B. Winn
The rock art of the Chillagoe-Mungana district, north Queensland: Sacred spaces, shared boundaries and trade
June 2011
72
66
Thesis Abstracts
You must be a member to download the attachment ( Login / Sign up )