The Lightning Brothers Project: The 1988 and 1989 field seasons 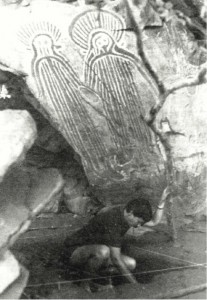 Rock art and excavations at Mennge-ya (published in Australian Archaeology 31:89).

In 1988 we began a research project in Wardaman country, Northern Territory (Fig. l). The project centres on the rock art located to the immediate northeast of the Victoria River and to the south of Katherine. The rock art itself currently forms an integral part of Wardaman lore, and is largely seen by Wardaman people not so much as ‘art’ but as an expression of the land and of the Dreaming beings which give identity to the land (cf. Frost et al. in press; Merlan 1989). As our research interests combined both archaeological and anthropological aspects, we were interested from the onset in documenting not only the rock art, but also aspects of the contemporary narrative tradition which today gives the art meaning to Wardaman people. This paper introduces the various research questions which have given rise to the project, outlines the fieldwork undertaken during the first two field seasons in Wardaman country, and documents some preliminary results of this research.