The geoarchaeology of a Holocene site on the Woolshed Embankment, Lake George, New South Wales 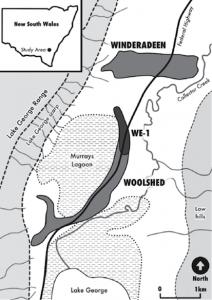 An extensive scatter of stone artefacts recorded as Site WE-1 on the Woolshed Embankment at the northern end of Lake George in southern NSW has been examined in the light of recent information on the lake’s history. Optical dates show that the core of the embankment formed between ~22,000 and 15,000 ya. Archaeological materials have survived in the overlying deposits, though they have been affected to a degree by repeated cultivation. These archaeological assemblages are now able to be interpreted in the light of a reconstruction (by Fitzsimmons and Barrows [2010]) of the Holocene lake history. The site was used during the mid- to late Holocene, initially during the penultimate high lake stand between 6000 and 2400 ya. The artefact assemblage has been inundated periodically by high lake levels, and potentially mixed by wave action. A silcrete- and backed artefact-rich and bipolar artefact-poor assemblage on part of the site was replaced across the whole site by one that had lower proportions of silcrete and backed artefacts and higher proportions of bipolar artefacts, a pattern similar to that observed in other sites in southeast Australia.

Hughes, P., W. Shawcross, M. Sullivan and N. Spooner
The geoarchaeology of a Holocene site on the Woolshed Embankment, Lake George, New South Wales
June 2014
78
x–x
Article
You must be a member to download the attachment ( Login / Sign up )