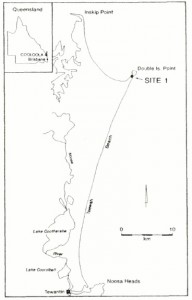 This paper reports on the excavation of two Aboriginal burials from near Double Island Point, Cooloola National Park, southeast Queensland. The work represents the first controlled excavation of Aboriginal burials in southeast Queensland since Haglund’s Broadbeach Aboriginal Burial Ground excavation in the 1960s (Haglund 1976). The examination of the two burials arose out of a larger regional study of settlement and subsistence at Cooloola (McNiven 1985, l990), which focuses on Holocene shell midden and stone artefact scatters. This project revealed that historically recorded resident groups of marine-oriented peoples across the northern and southern sections of the region probably developed during the last 1000 years. In that connection, this paper details two burials pertaining to this Recent Phase occupation of Cooloola. It provides a description of the antiquity and method of burial and documents consultations with local Aboriginal groups.

McNiven, I.
The Double Island Point Aboriginal burials, coastal southeast Queensland
June 1991
32
10–16
Article
You must be a member to download the attachment ( Login / Sign up )