The Archaeology of Market Capitalism: A Western Australian Perspective by Gaye Nayton 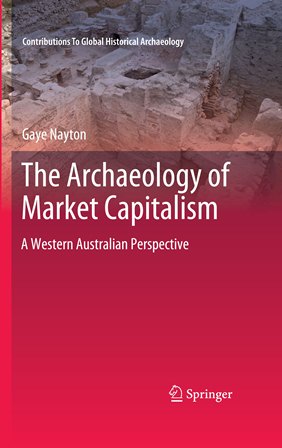 Reviewed by William B. Lees

Western Australia has never been accused of being a hotbed for historical archaeology research and theory building. In The Archaeology of Market Capitalism, Gaye Nayton establishes the rationale for why this should change.

Western Australia is a story that should be reminiscent to historical archaeologists who work in other parts of the world. A majority of research is conducted through cultural resource management projects. These studies are not been guided or informed by a coherent research agenda capable of improving our understanding of the historic past beyond what can otherwise be accomplished by studying memory and documents alone. Without purpose, results of archaeological research about the historic period appear trivial, unimportant, and uninteresting. Nayton has invested a considerable effort in her book expressly to begin to replace this pattern with one that is inherently research-driven.

Nayton’s book is at one level focused on analysis of excavation data from a single site in the town of Cossack – the Knight and Shenton Store – occupied between 1870 and 1941. Considerable time is spent, however, in examining the development of market capitalism in Western Australia in order to define research questions that can be addressed at this site. Nayton attempts to answer these questions in the final chapters of the book using data from the store, which is one of the only collections from Western Australia that has benefitted from large-scale scientific excavation.

The introduction to this book establishes Western Australia as potent comparative laboratory for the study of the emergence of market capitalism in the Swan River Colony of the Southwest and in the North District in northwestern Australia. Market capitalism arrives in the west of Australia as the first Western economic system. The ensuing pattern of land-use and settlement is established on a complex and challenging landscape. Equally important in defining this cultural laboratory is the related yet significantly differential settlement histories of Southwest and Northwest Australia. The Southwest is settled in the 1820s, and the Northwest some 30 years later, at a different point in the evolution of the market economy in Western Australia.

Chapters 2 and 3 introduce the patterns of settlement of the Southwest’s Swan River Colony which date from the 1820s. The rest of the book focuses on the Northwest Region, first settled in the 1860s, beginning with background in Chapters 4 and 5. Throughout these first chapters research questions which can best be addressed using historical archaeological research are defined and refined.

These research questions help to focus the remainder of the book, which starts with a review of town site-level archaeological surveys of Cossack, Broome and Old Onslow in Chapter 6, and which is followed by the first of several chapters focused on the Knight and Shenton Store in the community of Cossack. Chapter 7 provides detail on the excavation of this site. In this chapter Nayton develops a method for the segregation of tightly-dated subassemblages within the site which is able to correlate with documented changes in function, ethnic occupation and status. Chapter 8 focuses on site layout and building design, and Chapter 9 on assemblage analysis. In this final chapter Nayton considers a series of broad questions about the settlement of Western Australia using the Knight and Shenton data and comparative data from elsewhere in the world (due to the lack of comparable data from Western Australia).

A good portion of this book is spent in reviewing a very interesting set of geographical and historical data, including early accounts, census data, maps, and photographs, in order to establish the social history of first the Swan River Colony of Southwest Australia and then the Northwest. Nayton sets out to examine the development of market capitalism at the landscape or regional level, the town level, and the site level. Her analysis is detailed, and is focused on extracting from historical documents information on the physicality of settlement in these two regions. Wherever available, she adds archaeological information, which provides detail not found elsewhere. She uses this insight to evaluate the fit between what she is seeing in these regions and expectations that she has derived from a variety of archaeological theories of ‘frontier’ settlement and growth that have been developed over the past four decades by a variety of scholars.

At the outset of this book, Nayton identifies another important issue that faces Western Australia. The ‘frontier’ period in which she is interested was brief, lasting only 30 years in the Southwest and 50 in the Northwest. This presents a methodological challenge for the archaeologist seeking to examine change through time in the archaeological record. One approach to this problem would be to identify short-term use sites from different periods and with different functional and cultural attribution and that collectively can address change through time and space through a comparative approach. Nayton seeks to address this challenge, however, by dissecting the assemblage from a single site with a long and complex occupation history.

In her analysis of the Knight and Shenton Store Site in the town of Cossack, Nayton uses detailed material cultural analysis to define chronological subassemblages within the site. She successfully correlates these with historically defined periods that are only a few years in duration. These periods define changes in the use of the site, as well as changes in the ethnicity and status of the site occupants. Her analysis not only allows an evaluation of differences between these periods, but also reveals changes in the use of different parts of the site through time.

Nayton’s analysis of the Knight and Shenton Store is admirably done and she attempts to use the resulting data to address a number of significant questions concerning the development of market capitalism in Western Australia. She is constantly confronted by the lack of comparative data which throughout this book she has shown simply do not exist. She reaches out to North America and eastern Australia for comparison, but still lacking is any ability to validate the patterns from the Knight and Shelton Store as representative of the region. This is both a shortcoming and strength of this book. It is a shortcoming because without the comparative data from Western Australia the conclusions are open to question. It is a strength in that it establishes the basis for comparison as additional data becomes available, and because is screams for the need and ultimate value of additional excavation level data and research.

Nayton’s book is at time a bit tedious, but it is a thoroughly researched and documented study. It is important in that it presents a coherent theoretical approach to the use of archaeology to study the development of market capitalism in Western Australia. Scattered throughout this book are numerous cases of disappointment turned into opportunity; where she laments that the answer to a question can only be addressed by archaeology not yet conducted. The opportunity, of course, comes from the fact that these questions have been expressly identified. They are now readily available to help guide future research regardless of scope.

I am impressed with the detailed attention given to the Knight and Shenton Store given its severe looting in the past. Many historical sites, especially in urban settings, are similarly damaged through looting or development. Showing that sites such as this can still reveal significant information is critical in order to counter those who would say they no longer have integrity and value and need not be preserved or investigated.

In closing, I would like to return to a statement that Nayton makes in her introduction: ‘Australian archaeologists have not yet proved to the wider audience the importance of Australian historical archaeological sites to understanding Australia: how it developed, why it developed and how people were shaped’ (p.x). In this book, Nayton is making the case to her archaeological colleagues for the importance of historical archaeological sites in Western Australia. She has done this well, and has also shown the great need for additional research. This is a critical first step. Additional research is without question an important second step, but what also needs to follow – and I know that Gaye Nayton agrees – is to take this story to our colleagues in related disciplines, and then to the general public.

William B. Lees
The Archaeology of Market Capitalism: A Western Australian Perspective by Gaye Nayton
December 2011
73
78-79
Book Reviews
You must be a member to download the attachment ( Login / Sign up )