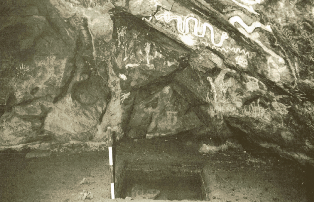 In this paper we present the initial report for the first Pleistocene occupation sequence to be excavated in the Western Desert of Australia, from the site of Serpent’s Glen (Figures 1 and 2). We identify a three phase sequence with an earliest unit dating to before 23,500 BP, an intermediate unit comprising culturally sterile sediments and an upper unit dating to less than 4700 BP. Previous excavations within the Western Desert have only provided Holocene assemblages (Gould 1977; Smith 1988; Veth 1993). Indeed, the majority of these sites have been dated to the mid- to late Holocene.

O'Connor, S., P. Veth and C. Campbell
Serpent's Glen Rockshelter: Report of the first Pleistocene-aged occupation sequence from the Western Desert
June 1998
46
12–22
Article
You must be a member to download the attachment ( Login / Sign up )