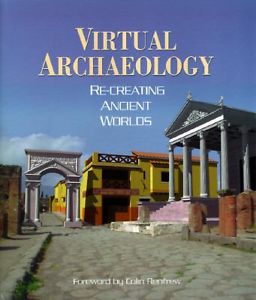 Virtual Archaeology is a charming, beautifully presented, global romp through numerous interesting archaeological sites illustrated by computer-generated images. Greatly to the editors’ credit a diverse range of sites is described, and many are new discoveries or less familiar ones than the staples like Abu Simbel and Pompeii. This is not just a re-run of the familiar great discoveries, and successfully indicates the breadth and the extraordinary novelty of current archaeological research. Both as an archaeologist and as a general, interested reader you are likely to learn about something you never knew before. As an overview of world archaeology it is a worthwhile contribution – entertaining, attractive and splendidly polyglot. I recommend it as an enjoyable experience – to fascinate a potential archaeologist, give some light relief and some good brief summaries of archaeological sites to busy undergraduates and to interest anyone who gains pleasure from our vicarious experience of the past.

The relatively small number of authors, mainly Italian and French, who have written the individual pieces on each site, have done a credible job. The translation was done by Judith Toms and Robin Skeates. The text is, to their credit, unfussy and unobtrusive. Unascribed, credit is also due, I suspect, to the 15 other archaeologists in the UK and the USA who assisted with the English edition. Just a note – despite his name on the spine Colin Renfrew is neither said to have edited or written the book. He just wrote the Foreword, as the dust jacket and cover page state. This is a neat marketing ploy, but a bit of a nightmare for naive book-searchers and lazy students preparing bibliographies!

The book is broadly organised into a regional format commencing with North Africa and Southwest Asia (87 pages), then Europe (87 pages), Asia (49 pages) and finally the New World (43 pages). It would be nice one day to see Asia at the head and Europe appended as a minor peninsula. The European cultural tail has only wagged the world dog relatively recently and world archaeological publications should seek to redress the story. The quantity of material for each region is not so surprising since a vast amount of archaeology is done in Europe and it is the home of numerous visualisers. But is this not true for the New World too? Are there really fewer visualisations done by US researchers on the archaeology of North America, or for that matter, the rest of the New World? I notice, for instance, that Dean Snow’s Iriquois work is missing. To be fair, I am sure much else is left out too, and a book of this sort cannot be expected either

to do everything or to be truly even-handed. But a suggestion to Western publishers – when you go global try to make sure you do so properly and with some regard for the scale and contribution of the rest of the far more numerous, immensely creative people of this planet.

Now to discuss the virtuality of Virtual Archaeology. This is not, of course, virtual archaeology in the proper sense that you could ‘walk around’ or explore a true virtual reality. ‘Virtual’ has begun to mean ‘computer generated image’, essentially because the label is so sexy that we would be foolish not to exploit it. There is another aspect to the issue of virtuality – the use of computer images for analytic and technical interpretative purposes to allow one to see what is not readily observable, whether because it involves representing time or visualising the influence of a variety of factors in one image. This would have taken this work out of the realm of the regular ‘artist’s reconstruction’ into an exposition of true virtual reality. There is not much of that in this book. It is a pity, for instance, that Zoran Stancic’s GIS-based work on Hvar in the Adriatic is not sufficiently apparent to his Italian colleagues (or his British colleagues), to be included. This neglect of analytic visualisation is more than moderately serious because it fails to emphasise where the substance of future computer visualisation needs to lie. The section on Karnak (p.540) mentions that the CNRS and Centre Franco-Egyptian have created a visual analytic record of the New Kingdom temples. It breaks down their structure into simpler and more easily definable elements from which we can ‘improve our knowledge both of the technologies used in antiquity and of the evolution of the site’ (p.540). If this is an analytic system then it should have been illustrated, not just the pictures you can get out of it. If it works then this is a logic of profound value for studying settlement structure and monuments all over the world.

Most of the illustrations in this book are either excellent technical drawings like the wonderful 3D work done for National Geographic and well represented by the images of the Mochica tombs at Sipan, in the New World section, or variants of electronic artwork. The former are immensely valuable as educative tools. Falling into this category also can be 3D rotatable images of buildings, for instance the work on the townscape of Imperial Rome. However, when the images seek to stand as reconstructions for a modern observer to try and envisage the past we run into problems. There are a few exceptions to this criticism. The atmospherics of the Catal Huyuk image (p.73), with its haze and light, begin to offer an emotive impact that should become the minimum standard for such artwork. Only that image, the Cahokia view on p.8 and the fabulous unnerving pink of the Palenque views (p.257) are doing an artistic job. As yet, other computer visualisations fall far short of the sensual and emotive flavour of a graphic artist. If you have the opportunity, look at the watercolour reconstructions of Assur and Babylon by Walter Andrae (Time-Life Books 1995:45). Little is portrayed, but the sense of urban place, the might of Babylon and its dusky evening ordinariness are extraordinary. Until computer generated images lose their glitter and dull, ‘show-it-all air’, they will not adequately serve to represent an emotive engagement with the past. Until computer visualisation truly exploits the unique qualities of time lapse, juxtaposition and alternative expressions of the same scene, we will not have moved into a new era of representation. At present, as this book illustrates, we are still exploiting computer graphics to do what we are used to doing. The next book on Virtual Archaeology should maintain the quality of this one but change the purpose.

Fletcher, R.
Review of ‘Virtual archaeology: Re-creating ancient worlds’ edited by Maurizio Forte and Alberto Siliotti
June 1998
46
56–57
Book Reviews
Download
You must be a member to download the attachment ( Login / Sign up )