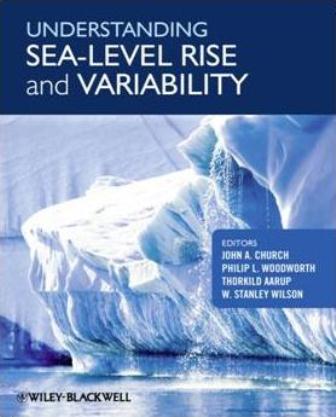 Archaeologists are always on the lookout for new and useful texts on sea-level change and variability and the title of this book sounded promising, but is a touch misleading. It relates only (with the exception of Chapter 4) to sea-level change and variability in the last few decades and relies substantially on high level technical measurements (e.g. satellite altimetry).

The book is the outcome of a workshop held in Paris in June 2006 attended by 163 scientists from 29 countries. Reference to papers published in 2010 in all chapters indicates they have all been updated. This book is big in a number of ways. It has 13 chapters all multiauthored (Chapter 12 has 24). Overall there are 98 expert authors; eight Australian-based. Many coastal archaeologists will recognise some of the prominent names in the field. There are over 100 figures (most in colour) and numerous tables and each chapter is comprehensively referenced. There is a list of abbreviations and acronyms (pp.xxii-xxvi) and an index (pp.421-428). All chapters have a comprehensive summary of directions for future research.

The book has not been written for the general reader; this is a detailed theoretical and technical summary of sea-level change and variability with reference to the last few decades. The book is beautifully presented by Wiley-Blackwell with no more than a handful of typos.

There is little of the rhetoric that besets the current global warming debate. Having said that, I thought I was off to a bad start when the first sentence of the book states: ‘Sea-level variability and change are manifestations of climate variability and change’ (p.xvi). There are indeed many other things apart from climate that cause sea-level change and Chapter 10 on solid earth geophysics provides a good example of these, which range from the relatively straightforward to the conceptually complex and from seismic deformation to changes in the earth’s rotation.

Given the technical nature of the content of this book it would be wrong (and impossible) for an archaeologist to critique it in any detail. Hence I will simply make what I think are some useful observations.

Chapter 1 (Introduction), for example, among other things, provides a useful coverage of uncertainty: ‘estimates of the timescales, magnitudes, and rates of future sea-level rise vary considerably’ (p.1); ‘estimates of the sea-level change as a consequence of direct human intervention contain many uncertainties’ (p.10); ‘this book is primarily concerned with the uncertainties in determining how global sea-level has changed in the past and will change in the future.’ (p.13). This chapter also makes it very clear how recent are the use of sophisticated measuring techniques and the development of co-ordinated programs. Many of these have yet to bear fruit.

Chapter 2 on impacts and responses to sea-level rise again focuses on uncertainty and while the authors accept that global sea-level rise is a pervasive process, they suggest it is difficult to unambiguously link it to impacts, since most coastal change in the twentieth century was a response to multiple drivers of change (p.28). Through pages 37-41 they outline the critical debate between adaptation and mitigation. This is a difficult debate to resolve owing to the costs involved and the intrusion of alarmist/non-alarmist views. Chapter 3 is a very brief chapter outlining sea-level impacts on offshore structures and coastal refineries.

Chapter 4 includes the Australian-based authors Kurt Lambeck and Colin Woodroffe as contributors and the long span of sea-level is discussed and an archaeological contribution is recognised. Archaeologists will recognise the importance of the view that sea-level change, today and in the future, will continue to respond to past events. Also: ‘This occurs for several reasons, including crustal response to past glacial retreats and re-advances, coastal subsidence from past sediment deposition, from present tectonic upheavals … and from delays in the adjustment of the oceans to changing thermal or salinity regimes’ (pp.61-62). In this chapter the authors take the view that there have been only minor changes in the Holocene sea-level record but an alternative view is only briefly mentioned (pp.72-73). There is also a very brief section on archaeological sea-level indicators (pp.81-84). Archaeological readers would have to follow these debates through the references to get a greater appreciation of the issues. The authors note ‘Although a few of the longer tide-gauge records suggest a mid-nineteenth century acceleration in sea-level rise, ‘most are of too short a duration to be adequately compared with paleoecological proxies of sea-level change. Generally the accuracy of the latter proxies is such that signals characteristic of the past century would barely rise out of the noise levels of the data for the earlier period’ (p.100).

Chapter 5 discusses modern sea-level estimates which largely rely on tide gauges and satellite altimetry. Without meaning to be negative, I found the most interesting points of this chapter were the poor coverage of tide-gauges (p.124); that satellite altimetry only began in 1992 (p.133) and has many technical problems. It appears that sea-level change started about 1900 or even earlier (pp.125-126) raising the issue of how this fits with global warming caused by humans (assuming a delayed reaction time).

Chapter 11 discusses past and future changes in extreme sea-levels and waves and concludes that there is little evidence for extreme sea-levels changing over an extended period by amounts significantly different to mean sea-level (p.330). It is also noted that the common assumption that global warming will lead to increased storminess is somewhat contradictory (p.341).

Chapter 12, with 24 authors, outlines the observing systems that are needed to address sea-level rise and variability. So many sophisticated systems (which are costly) are proposed that it struck this reader that it might confuse rather than clarify. And the authors seem to come to a similar conclusion when they note that ‘based on what we have learned from more than 10 years of aircraft laser surveys over Greenland, seasonal and interannual elevation variability is so large that identification of longer-term trends will require decades of measurements’ (p.385). Chapter 13 is a brief but useful synthesis and outlook.

I cannot recommend that archaeological colleagues purchase this book (though make sure your library has one) as it relates so much to modern sea-level change and is highly technical. Chapter 4 is useful, but the archaeological sections are brief and readers would need to follow the references to get a broader perspective. However, for the sea-level specialist it is a comprehensive and beautifully presented book.

Mike J. Rowland
Review of Understanding Sea-Level Rise And Variability edited by John A. Church, Philip L. Woodworth, Thorkild Aarup and W. Stanley Wilson
June 2011
72
57-58
Book Reviews
You must be a member to download the attachment ( Login / Sign up )