Review of ‘Uncovering Australia: Archaeology, Indigenous People and the Public’ 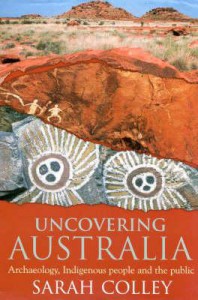 Sarah Colley’s book claims to be ‘an accurate, timely snapshot of the state of archaeology in Australia today and its interplay with the institutions, the culture and the ideas of the time’. This is a big call. So has Colley managed to pull it off? Australian archaeology, despite its relatively small size compared to many other professions, is a fragmented assemblage of practitioners. It is also a culturally embedded domain with broad popular interest because it deals with people’s history, heritage and ultimately their identity. As such, archaeology in Australia, like archaeology in all parts of the world, has multiple representations stemming from multiple stakeholders from diverse backgrounds. At the very least, we have emic representations by practitioners and etic representations by a media-informed public. We also have different opinions on a range of archaeological issues: What is appropriate to research archaeologically? What are legitimate and ethical archaeological techniques? Who is qualified to make archaeological inferences about the past? Who has the authority to control archaeological research? Who ‘owns the past’ and has the right to control the protection of archaeological heritage? These are but a few of the fundamental issues that have gripped Australian archaeology over the last couple of decades. The fallout and outcomes of these debates are so profound that they are rapidly changing the face of Australian archaeology. The archaeology I was taught as an undergraduate in the early 1980s is not the archaeology undergraduates are exposed to in the 21st century. Colley’s book Uncovering Australia succeeds because it chronicles, highlights and critically discusses these issues, debates and changes.

The issue of whether or not different groups of Indigenous Australians want archaeological research undertaken on their history and heritage is complex and nuanced (cf. Chapter 3). It is not simply a case of Indigenous people agreeing to archaeological research because they like archaeological findings. In some cases, people may begrudgingly agree to research because it will help support a native title claim. In other situations, people may follow a Dreaming ontology that sees Aboriginal people as eternal occupants of the land, but at the same time fully support and encourage excavation of Pleistocene or more recent cultural materials (e.g. Judith Field’s ‘Cuddie Springs Project’ and Bruno David’s ‘Ngarrabullgan Project’). A key issue is the management of results and the degree to which Indigenous people feel they co-own the research process and have control on the wider dissemination of results.

Colley follows a growing body of literature pointing out that many tensions between archaeologists and Indigenous peoples are a legacy of colonialism. However, the issue of ‘who owns the past’ and who controls interpretations of the archaeological record also have wider relevance in the Australian public arena. Colley briefly discusses the early role played by amateur archaeologists in the development of Australian archaeology. She notes that a consequence of the professionalisation of Australian archaeology during the second half of the 20th century was marginalisation of amateurs and the wider public from the practice of archaeology. In this sense, the lack of engagement with Aboriginal people can also be linked to a broader process of exclusion. However, Colley points out that despite the rise of academic archaeology, the ‘amateur archaeology’ scene remains strong. She notes that ‘alternative archaeology’ and New Age interpretations of the Aboriginal past have a wider market than ‘professional’ offerings in AA or AO. Furthermore, it seems that much of the widespread public support for, and media coverage of, Graeme Walsh’s controversial interpretations of Bradshaw rock paintings in the Kimberley stem from Walsh’s independence from both the halls of academia and the perceived conservatism of ‘boffins’. Colley also points out that many Australians believe that professionals are not just conservative but involved in a conspiracy to hide the true history of Australia – a history that includes ancient Egyptians and Phoenicians.

Uncovering Australia makes a unique and valuable contribution because it decentres the academy and exposes Australian archaeology as a multi-dimensional domain and multi-representational arena. It is written in an engaging style and lives up to its aim of being ‘an easily accessible overview to students, interested members of the public, academics in other disciplines and archaeologists overseas’. Overall, the ‘snapshot’ presented is one that I immediately recognised. Uncovering Australia leaves us at a point where future chroniclers of Australian Indigenous archaeology need to enter into deeper theoretical explorations of contentious issues while at the same time providing positive role models of successful partnership research projects between archaeologists and Indigenous communities. Colley points out that the road to success it not only recognising and overcoming our limitations, but also understanding that we need to take a more active and responsible role in the representation of our profession in the public arena.

McNiven, I.
Review of 'Uncovering Australia: Archaeology, Indigenous People and the Public'
2003
56
61
Book Reviews
Download
You must be a member to download the attachment ( Login / Sign up )