Review of ‘Tracks, scats and other traces: A field guide to Australian mammals’ by Barbara Triggs 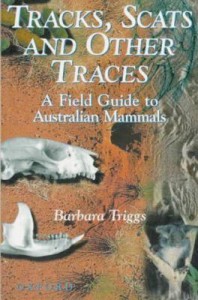 An elegant conceit underlies this fascinating and valuable book. Because most Australian mammals are crepuscular. nocturnal, or simply shy, if you want to learn how to ‘see’ them in their habitat, you had better concentrate on their tracks, scats, nests, burrows and bones, because chances are good that you will never see the animals themselves. This philosophy will resonate with archaeologists, who are used to inferring the presence of complicated biological and social relationships from their material traces. In addition, there are a number of reasons why archaeologists will find this work more useful than books that simply illustrate the animals, such as Strahan’s (1995) compendium, the Complete Book of Australian Mammals, which is full of informative colour photographs and distributions, but which was not aimed at facilitating field identification.

Tracks, Scats and Other Traces on the other hand, is explicitly aimed at those nature-loving Australians (lay or specialist) who are keen to recognise mammal species in the wild. More than this, it fills a need for field archaeologists, especially those interested in Aboriginal mammal procurement and the interpretation of animal bones from archaeological sites. With many innovations since its first incarnation (i.e. Triggs 1984), and with its coverage extended to all of Australia, this new work will more than update its precursor.

There are four major divisions in the book: Tracks; Scats; Shelters, Feeding Signs and Other Traces; Skulls, Lower Jaws, Humeri and Femurs. A section begins with a pithy theoretical background to the information obtainable from each class of observation. Those who are new to, for example, scatology, will find these introductions helpful.

Additional aids to identification are to be found throughout the work. For example, photographs now augment the line drawings and the textual descriptions of tracks, which is an improvement over Mammal Tracks and Signs.

Photographs have also replaced the colour drawings of scats found in the earlier version. These are a real improvement over the original. I find that these more accurately capture the colour, texture and composition of the substance.

Distribution maps are still to be found dispersed throughout the section on scats, a feature I find distracting. The author was undoubtedly at pains to find a place for the maps, but it might have been more helpful to treat geographical distribution as a separate datum, thereby allowing the maps to be placed together in the text.

Much more space is devoted in this work to shelters, feeding signs and other traces, including numerous colour plates of entrances, food refuse, and signs such as marked trees. Indeed, there is little that this information-packed volume does not deal with.

My personal favourites among the innovations in this volume are the clear black-and-white photographs of skeletal elements. For many faunal identification purposes photographs can be indispensable. In spite of this helpful addition, I would have preferred it if the author had used line drawings for the dental illustrations, since even though the photographs are clear, subtle information is at times lost to transluminescence in the images of tooth-bearing elements.

I said at the outset that archaeologists should find this book very valuable. There is a straightforward reason for this. Whether you are primarily interested in animal remains, or simply concerned to achieve an all-round impression of the surroundings of an archaeological site, it is important to assess the present faunal community. Only in this way is it possible to fully monitor changes in the community over time to identify and potential new agents of disturbance, or to get a fix on the constituents of the present community by which to assess the likelihood of ‘drop-deads’ in the recent sediments.

I have no substantive criticisms of this book. Even down to the inclusion of a millimetre scale on the back cover, it is replete with useful and thoughtful detail. I mentioned some mild frustration with the location of the distribution maps. I have only one other criticism of the presentation. Triggs prefers to use her own plain English terms for skeletal element portions and landmarks (although, curiously, not for the skeletal elements themselves). This is obviously to conform with her preference for using common names for the animals, the term scats instead of faeces, and so on. However, unlike the species names, for which Linnaean classifications are also provided, readers who are unschooled in osteological terminology will undoubtedly remain so, if all they ever looked at was this book.

Tracks, Scats and Other Traces: A Field Guide to Australian Mammals fills a need that every archaeologist can readily recognise. This much expanded and augmented treatment should be on every Australian archaeologist’s bookshelf.

Gargett, R.H.
Review of ‘Tracks, scats and other traces: A field guide to Australian mammals’ by Barbara Triggs
June 1997
44
75–76
Book Reviews
Download
You must be a member to download the attachment ( Login / Sign up )