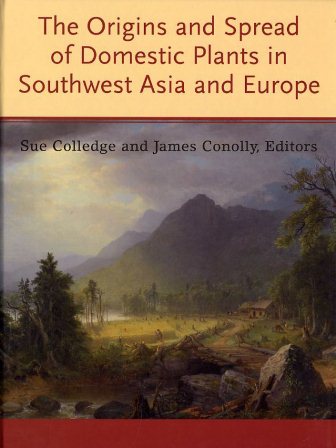 The archaeobotanical research assembled in this beautifully presented and large-format volume is simply staggering. The aim of the editors was to compile a synthesis of regional studies that document the initial domestication of plants in Southwest Asia and subsequent diffusion to Northwestern, Central and Eastern Europe. The editors should be applauded for their impressive efforts. Although there are some glaring omissions, namely the archaeobotanical evidence of early agriculture in Turkey and France, these are acknowledged and were beyond the control of the editors. Furthermore, these omissions are quickly forgotten once you immerse yourself in the wealth of data presented.

The detailed regional syntheses that constitute the core of this volume are preceded by a series of framing, or introductory, contributions. A Foreword (Shennan) and an Introduction (Colledge and Conolly) provide some background to the volume and the conference from which it was derived; they also acknowledge the enormous contribution to this research field of Gordon Hillman, to whom this volume is dedicated. Significantly, in the introduction, the editors elicit five common themes that emerge from the regional syntheses, and which are of general relevance:

1. Regional variations in crop use: The suite of crop plants cultivated varied spatially, with a marked reduction in crop diversity from Southwest Asia to Northwestern Europe.

2. Origins and uses of secondary domesticates: Various plants were locally and regionally brought under cultivation and domesticated at different times outside Southwest Asia.

3. Use of wild taxon: Wild food plants, including fruits, seeds, nuts and roots, were variably important for subsistence alongside domesticated cereals.

4. Weed ecology: The ecologies of weed taxa provide a means to understand local, within-field, environments and associated cultivation practices in the past.

5. Impact of methodological advances: The systematisation of archaeobotanical research enables the comparison of datasets from widely dispersed regions.

The first substantive chapter of the volume is conceptual and written by the late Andrew Sherratt. He sought to open discursive space by looking beyond cereals in our understanding of agricultural emergence, transformation and diffusion in Southwest Asia and Northwestern Europe, as well as by examining the conceptual and terminological baggage of the ‘Neolithic’. The following two regional syntheses, both in Southwest Asia, also raise points of general interest to the reader. George Willcox considers the transition to farming to have been a gradual process in Southwest Asia generally, as exemplified by a fragmentary archaeological record reconstructed from ‘a discontinuous chronological sequence from a few widely dispersed sites’ (p.32) covering 3500 years in the EuphratesValley. Michael Charles reflects on the taphonomic biases of the archaeobotanical record, most significantly the over-representation of cereals through differential preservation with respect to softer plant parts and through the incorporation of fodder into dung.

Subsequent regional syntheses are arranged in approximate chronological order, namely in terms of the timing of the earliest domesticates and agriculture as recorded in archaeobotanical assemblages. This order is not strictly followed here, primarily because there is insufficient space in this review to give each individual regional synthesis justice. Indeed, given the readership of this journal, many of the details are not relevant. Of most significance, the volume brings to light vast amounts of poorly known data from Central and Eastern Europe, including Bulgaria (Marinova), Romania (Monah), Hungary (Gyulai), Slovakia (Hajnalová) and Poland (Lityńska-Zając; Bieniek). These regional syntheses chronologically and, to a degree, geographically interdigitate with the better-known chronological scenarios of domesticate dispersal from Southwest Asia to Cyprus and Crete (Colledge and Conolly), and the Aegean (Valamoti and Kotsakis), with subsequent dispersals to: Italy (Rottoli and Pessina) and Spain (Buxó; Peña-Chocarro; Peña); Austria (Kohler-Schneider), Switzerland (Jacomet) and Germany (Kreuz); and, the Netherlands (Bakels), Germany (Kroll), southern Scandinavia (Robinson) and Britain (Stevens; Jones and Rowley-Conwy).

To take the extraction of common themes further than the editors, a major idea resonating through many regional summaries of archaeobotanical assemblages associated with early agricultural practices is the variable deployment of ‘indigenous’ (namely, emergence in situ) and ‘introduced’ (namely, diffused from elsewhere) food plants and technologies within specific historical contexts. Food plants include primary and secondary domesticates, as well as wild foods, and technologies include cultivation and processing practices. People in different places and at different times assembled, both advertently and inadvertently, a specific form of agriculture based on a repertoire of food plants and cultivation technologies including both indigenous and introduced components; through time, these forms of agriculture were structured by both environmental and social contexts, and were subsequently transformed in regionally specific ways.

Of related relevance, social networks connected these far-flung regions before the advent and diffusion of agriculture from Southwest Asia. As Sherratt hints, these networks structured the ways in which domesticates and agricultural practices diffused and were adopted. Thus, agriculture may not have just spread outwards from a centre, rather it variably emerged through a mosaic of pre-existing interactions and practices. Again, there is a need for balance in the emphasis between a Neolithic wave (introduced) and in situ Mesolithic transformation (indigenous). Perhaps, an inability to reconcile the dualistic terms of this debate, within individual regions and pan-regionally, indicates that the whole frame of reference needs to be reconceptualised.

Despite the apparent strangeness of this region to many readers of this journal, there are many points of relevance to researchers in Australia and Oceania, particularly the latter region. These include:

At one level, it is perversely reassuring to know that, given the wealth of evidence in the regions covered by this volume, there are no ‘ready-at-hand’ and transparent, historical interpretations to account for the observed phenomena. On the other hand, it is sobering to compare the quality and quantity of archaeobotanical data for Southwest Asia and Europe to the paltry evidence so far accumulated for Sahul. We have a long way to go …