Review of ‘The history and archaeology of the Sydney Cove shipwreck (1797): A resource for future work’ by Shirley Strachan 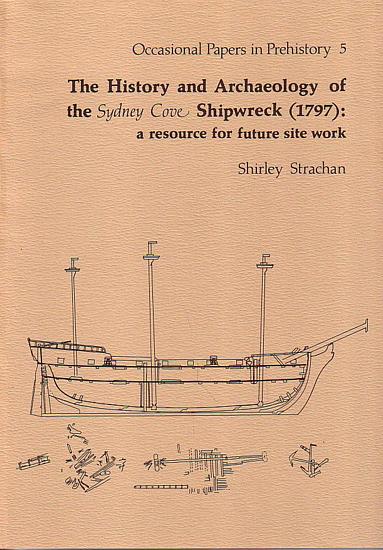 ‘The history and archaeology of the Sydney Cove shipwreck (1797): A resource for future work’ by Shirley Strachan, 1986, Canberra: Department of Prehistory Research School of Pacific Studies, The Australian National University, Occasional Papers in Prehistory, No 5. ISBN 0-86784-972-X.

Strachan gives a detailed historical account of the Sydney Cove and its sinking. This merchant vessel was wrecked northeast of the Tasmanian coast in 1797close to Preservation and Rum Islands. The cargo bound for Port Jackson was despatched from Bengal, and included 7000 gallons of rum, wine and spirits, numerous Indian goods and livestock. The wreck of the Sydney Cove was not a dramatic catastrophe in the sense that she sank within minutes or hours. Rather, Captain Guy A. Hamilton kept his ship from sinking for several weeks. Hamilton argues that the forced beaching on the 9th February 1797 was a result of rough hurricane weather, a leaky and water-logged hull and a ‘refractory lascar crew’.

After the beaching, a long boat was despatched for Port Jackson with 17 of the 35-40 crew members, while the rest of the crew awaited rescue on Preservation Island (the rum, wine and spirits were placed well out of reach on Rum Island). After beaching the longboat in the vicinity of Point Hicks (Victoria), only three men survived the 800 km walk to Port Jackson.  The remainder of the crew and some cargo were later recovered by the schooner Francis which made three voyages to the wreck in July and December 1797 and February 1798. A second schooner, the Elisa, was lost, with all hands, on the return journey from the Sydney Cove wreck (see also Henderson 1986 for an account of the Elisa wreck). All of the goods which Hamilton was able to recover and sell for the benefit of the underwriters fetched enormous prices.

The wreck of the Sydney Cove was rediscovered in 1977 by a group of recreational divers who salvaged the main rudder mechanism as well as tackle blocks which were later relinquished by the receiver of wrecks under the terms of the Commonwealth Navigation Act of 1912 to the Queen Victoria Museum for safe keeping and conservation (Strachan 1986:9; see also Henderson and Stanbury 1988:90). The site at this time was completely buried apart from a long wooden ‘beam’ later identified as the keel which was camouflaged by a heavy growth of seaweed.

Strachan correctly argues that the wreck of the Sydney Cove is not only important because of its historical significance, but also because of its technological significance. The Sydney Cove was originally built by Indian ship builders and later enlisted into the British trading fleet. Thus Strachan suggests that a comparison of Indian and British ship building techniques can be ascertained by excavating the Sydney Cove. Indeed, Strachan’s discussion and description of the rudder mechanism particularly is very interesting and revealing (1986:40-3). While no in-depth comparison. beyond that of the rudder mechanism is presented, a good description of the material recovered has set the foundations for such future research. Perhaps more detailed analysis could have been presented of individual artefacts recovered from the wreck, similar to Staniforth’s description and analysis of casks recovered from the William Salthouse (1987:21). However, given the limited time, money and the three short field seasons, Strachan’s results are impressive.

Unfortunately, the report largely fails to come to terms with site management with little discussion of site conservation. Site management is of great importance to maritime archaeology particularly with exposed and secluded sites. This often results in recreational divers stealing objects from a wreck and disturbing the site. External factors such as environmental disturbances are elsewhere well documented and discussed (see Cleator 1973:82; Marsden 1973: 483-92; Muckelroy 1978:36-48; UNESCO 1972:155-61), but this report fails to come to terms with these important issues though presented as a main research aim. Thus in this respect Strachan’s publication is a little disappointing.

The importance of this publication is not only the wealth of information supplied about the site and artefacts recovered from the wreck, but it is one of only a few detailed reports relating to shipwreck sites in Australian waters. Thus it is of potentially great research use, especially given its emphasis on data description and presentation.

Henderson, O. and M. Stanbury 1988 The Sirius: Past and Present. Collins Publishing.

Marsden, P. 1973 The Investigation of the Wreck of the Amsterdam. In D.l. Blackman (ed.) Marine Archaeology, pp.483-92. London: Butterworths.

Staniforth, M. 1987 The casks from the wreck of the William Salthouse. Australian Historical Archaeology. 5:21-8.

David Cameron
Review of 'The history and archaeology of the Sydney Cove shipwreck (1797): A resource for future work’ by Shirley Strachan
June 1994
38
71–72
Book Reviews
You must be a member to download the attachment ( Login / Sign up )