Review of ‘The Fabrication of Aboriginal History. Volume One, Van Diemen’s Land 1803–1847′ 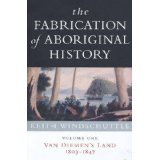 Keith Windschuttle’s project is to prove that the numbers of Aboriginal people deliberately killed by Europeans in the early days of colonial settlement were far fewer than is commonly believed, and that the numbers have been exaggerated for political purposes. This book is the first in a projected three volume series, and concentrates on Tasmania. He also argues that, contrary to received belief, there was no conscious policy of genocide, and also that there was no guerrilla war, no organised resistance waged by Aboriginal people in Tasmania. He further attempts to demonstrate that Tasmanian Aborigines had no concept of land ownership, that they numbered no more than 2000 souls at the time of European contact, and that (and this will be familiar to many readers) they were probably on the decline anyway, demographically and culturally.

Not only does Windschuttle suggest that scholars have exaggerated these issues, he accuses some of them of deliberate fabrication. This has understandably triggered a heated debate, particularly on the part of those scholars so accused. His general target is history and historians, and in large part his work is an exercise in historiography, dredging through footnotes to establish how well, or rather how badly, historians have supported their case. I do not intend to go over this ground to any extent, as historians can well look after themselves. In the case of this volume, however, Windschuttle has also targeted some archaeologists, and draws on some archaeological evidence to support his case.

This is in many respects a very peculiar book, as will emerge. Not the least of its curiosities is that no archaeologists are actually referred to as such: only historians and anthropologists people its pages (e.g. pp.59, 115, 419, 422) apart from Rhys Jones who is suddenly revealed on p.378 to be an archaeologist and a prehistorian. Since Windschuttle is Australian educated, he must be aware that in Australia the term anthropologist is generally reserved for people who study living societies by participant observation, and archaeologists are people who study societies both past and present through their material remains. I know of no-one calling him or herself an anthropologist who has worked with Tasmanian Aborigines since the days of Tindale and Birdsell. So it is hard to see whether this is some sort of deliberate policy, of which I at least fail to understand the point, or is just a form of sloppiness.

I will not here enter the fray about how many Aborigines were ‘deliberately’ killed by Europeans, and whether or not there was an intent of genocide formal or informal, nor the level of resistance put up by Aboriginal people. These are the areas in which Windschuttle is most scathing about historians, but not just historians. He takes Rhys Jones severely to task for the stories of atrocities against the Aborigines which are included in his PhD thesis. It would appear that Jones has not fully referenced these stories, and Windschuttle accuses him of outright fabrication: he refers to ‘Rhys Jones’s practice of simply making it up’, and comments that historian ‘Robson’s omissions are every bit as dishonest as Rhys Jones’s inventions’ (pp.45–46).

Of interest to archaeologists is the issue of the level of the pre-European population. Windschuttle challenges the general consensus of 5000–6000 people; obviously, if there were fewer of them to start with, it is easier to explain the decline in numbers. The consensus figure is derived primarily from the work of Brian Plomley and Rhys Jones, who have separately studied in detail the writings of George Augustus Robinson, the so-called conciliator of the Aborigines who made several journeys across Tasmania in the 1830s with Aboriginal people. Robinson’s journals (Plomley 1966) are a uniquely detailed source of information about Aboriginal life in the early days of the colony, but of course he was hardly a trained observer. Jones attempted to construct a picture of Aboriginal social structure from which he extrapolated the population levels. While his results are of course open to debate, they probably represent the best estimate that can be expected from this kind of data.

Windschuttle criticises some of the more extrapolative aspects of Jones’s work here, and also of Plomley’s, but does not really work out an alternative figure of his own. He states that ‘the only serious studies [of population] are those by Rhys Jones, Brian Plomley and James Backhouse Walker’ (p.367), and latches on to the figure of 2000 offered by Walker. And what does Walker’s ‘serious study’ consist of? As far as I can tell, he just quotes Joseph Milligan, the medical doctor at the Flinders Island Aboriginal institution in the 1840s (Walker 1973:269). Windschuttle seems to think he is a good source because ‘as well as being, with Ling Roth, one of the two genuinely scholarly nineteenth-century investigators of the subject, Walker was Vice-Chancellor of the University of Tasmania 1898–99’ (p.367 fn). Say no more.

Another line of attack on the question of Aboriginal populations in Tasmania was that of Colin Pardoe (1991). From his study of the relationship between morphological characteristics of Tasmanian Aborigines with those of the Australian mainland, Pardoe argued that the differences were so relatively small, given 10,000 or so years of isolation, that the population must have much larger than 6000 for the effects of genetic drift and founder effect not to be more evident. Windschuttle does not cite this work, published in Current Anthropology, at all. He must however know of it, because he cites a comment by Plomley attached to it (p.420 fn).

Even with a small population to start with, it is evident that something must have happened to the Tasmanian Aborigines to reduce their number to the very small remnant evident by the 1840s. Windschuttle invokes not only our old friend, the ‘slow strangulation of the mind’, but also ‘internecine warfare’ fought between Aboriginal bands over women, and of course disease, which was down to Europeans, but was not a deliberate attempt to kill them off.

The dysfunctionality of Tasmanian Aboriginal society is demonstrated firstly in their declining technology. According to the work of Rhys Jones, ‘they once used bone tools, barbed spears and weaving needles made of fish bone. They also had wooden boomerangs, hafted stone tools, edge ground stone axes and tools fashioned from volcanic glass … the manufacture of fish hooks and fish spears’ (p.378). Strangely, Jones seems to have got this right, despite being such a liar about other things, and having made such a mess of the population stuff. Of course, readers of AA will be aware that evidence for weaving needles made of fish bone (??), barbed spears, wooden boomerangs, hafted stone tools, edge ground axes, fish hooks and fish spears has never been found in Tasmania, and Jones never said any such thing. Who is making things up?

Windschuttle states in a footnote (p.378) that ‘there have been several attempts to argue the Tasmanians were not as technically backward as Jones claims. Few dispute his evidence, however, and instead offer rationalisations to show their actions were always ‘functional’ for their conditions’. Obviously the work of archaeologists (or anthropologists or whatever they are) does not need to be properly discussed or scrutinised before being summarily dismissed out of hand. Only other historians are to be held to account for not properly dealing with factual evidence.

One of the other reasons given for the sad decline of the inept Tasmanians is their bad treatment of women, including the above mentioned internecine warfare between bands during which women were routinely abducted. It might be observed that 10,000 years is a long time for this level of behaviour to be sustained without an earlier extinction episode. Windschuttle’s evidence for this however can be scrutinised in its turn. He states that ‘Robinson records at least ten other incidents of inter-tribal fighting to capture women’, with ten references to Friendly Mission (Plomley 1966) being footnoted. In examining these, I found that two (25/10/30 and 10–22/6/32) actually described not incidents, but generalised comments that such things happen or happened. One mentioned a practice of stealing women from neighbouring tribes. Two had no relevance to the issue at all. Two mentioned Aboriginal women being killed, not captured, another referred to an Aboriginal man stealing a female child, finally there was story about a woman leaving her husband and his subsequent revenge.

There is probably little need to go on in this vein. It is clear that the high standards prescribed by Windschuttle for others are not intended to apply to himself. Perhaps it is more important to ask what the point of this is. It is ironical that Tasmanian Aborigines who had to defend themselves against charges of not being who they were because they were supposedly extinct, now have to contend with not dissimilar people complaining about false reports of genocide. Of course Windschuttle does not believe they are who they say they are either, since the whole point of the exercise is to deny land rights or any special rights at all to Aboriginal people. He argues that they cannot expect land rights anyway since ‘the notion of ‘rights’ derives exclusively from the European political tradition, and has no meaning in traditional Aboriginal culture. The term ‘land’ is just as alien, having no role in either the vocabulary of the conceptual apparatus of Tasmanian hunter-gatherers’ (p.404). On the other hand, ‘Freedom of information might be a cultural artefact born in the West, but it belongs to all of humanity’ (p.421). Unlike rights.

Windschuttle also feels impelled to explore why all these historians have engaged in this pernicious conspiracy to make up stories about Aborigines. He finds the reason in their exposure to Marxism either as students, or genetically. ‘Lyndall Ryan’s parents, Jack and Edna Ryan, were well-known members of the Communist and Trotskyist political movements from the 1920s to the 1940s’ (p.401). Oh, for heaven’s sake. I went to school with a girl whose parents were hard-line communists and she became a raving New Ager avant le lettre. My mother holds Robert Menzies in high regard. So what? One begins to wonder why anyone is even taking this book seriously at all. But then this is from a man who appears to believe in all seriousness that the decline in belief in the Tri-Hybrid theory of Aboriginal origins is due to a communist plot.

One is left wondering why anyone should feel so violently in need of attacking the most oppressed and disadvantaged members of Australian society. Windschuttle writes with a total lack of affect for Aboriginal people, referring in many places to ‘natives’ and ‘half-castes’. Few people these days would be unaware that such terms are considered by them to be offensive, but evidently he doesn’t care about that. It just doesn’t seem to occur to him that you don’t need to invoke a communist plot to understand why people who work with Aborigines might feel some kind of fellow feeling for them: it’s called compassion.