Review of ‘The Domestication of Europe’ by Ian Hodder 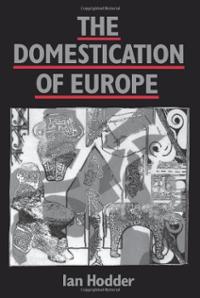 This is one of Blackwell’s excellent series of social archaeology texts and perhaps the most exciting and controversial to date.

Hodder begins by taking a basic structural stance in an attempt to identify underlying oppositions in the early Neolithic of the Near East and of southeast Europe. The main focus is on Europe and we are told that a volume dealing exclusively with the Near East can be expected in the future.

His starting point, although Hodder denies having one (p.1), is the symbolism associated with the well known sites of Lepenski Vir, Catal Huyak and Hacilar. But this volume is much more than a simple structural analysis of these data. An initial identification of binary oppositions leads on to a post-structural discussion of the Neolithic in not only south east Europe, but also central, north and west Europe.

In the first four chapters Hodder identifies and explains the primary opposition of domus-agrios (that is, house, nurturing, female, culture,etc versus outside, wild, male, etc), as identified in the archaeological record of south east Europe.

The following two chapters discuss these underlying structures in relation to the central European evidence. With the introduction of a new structural concept of the foris, which is expressed by doorways, entrances and boundaries, central Europe for me has the ‘best fit’ scenario. Hodder updates his 1984 paper with the realisation that tombs are not merely copying houses but rather that the similarities (eight are noted) are actually products of a continuity of principles derived from the deeper structures (p.1S3).

Domus-Foris-Agrios are words with Indo-European roots chosen by Hodder as unfamiliar to the majority of readers and therefore not already loaded with meaning. But, he also notes that they are words with a long history themselves possibly dating from the Neolithic (pp.302- 5).

Chapters 7, 8 and 9 discuss and explain the poor fit in southern Scandinavia, the good fit in northern France and the climax of these concepts as seen in the monumentality and division of the landscape in lowland Britain (p.271).

The final chapter introduces a long-term perspective for the identified underlying structures. Hodder suggests that the roots can be observed in the scant evidence of the Palaeolithic in Europe. Furthermore, that the historical unfolding of these structures can be witnessed in the postglacial, the Neolithic and beyond. It should be noted that Hodder is not advocating structural determinism, but that structures have tendencies, which leaves plenty of scope for action and contingency (p.278).

For an Australian audience the interest of this book is probably in the practical application of post-processualism in many of its forms, including gender, contextualism, landscape, performance, domination, deconstruction and self-analysis. Also worth noting is the fact that warfare has re-emerged as a popular theme in European prehistory. Hodder does give consideration to the possibility that these underlying structures are not unique to Europe and may indeed be a worldwide phenomenon (p.300).

Although borrowing much from Bender’s (1978) social competition approach and the undoubted criticisms of misuse of poor data by those who like to be scientific, this broad and brave synthesis will surely sit alongside the economic, environmental and demographic explanations for the domestication of Europe.

Hodder. I. 1984 Burials, houses, women and men in the European Neolithic. In D. Miller and C. Tilley (eds), Ideology, Power and Prehistory. Cambridge.

Rainbird, R.P.
Review of ‘The Domestication of Europe’ by Ian Hodder
June 1992
34
66–67
Book Reviews
You must be a member to download the attachment ( Login / Sign up )