Review of ‘The Discovery of the Hobbit: The Scientific Breakthrough that Changed the Face of Human History’ by Mike Morwood and Penny van Oosterzee 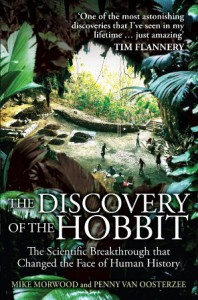 If the discoveries announced to the world in 2004 of a 1.3m, small-brained human species living on the island of Flores between 95,000 and 12,000 years ago still quite haven’t made it onto your radar, and you’d like to learn more, then this is the book for you.

However, even if you have heard all about it, you almost certainly won’t have the degree of insight that the authors present here regarding some of the political machinations and (pardon the pun) downright skulduggery that apparently went on behind the scenes.

I need to get one thing clear from the outset – I firmly believe that the Hobbit (and now that I’ve got your attention, that is the last time I’ll use the word), properly known as Homo floresiensis, is the real deal. Not a Laron Syndrome- or MOPD II-induced microcephalic modern human dwarf suffering from pathological shoulders, wrists, feet and brain, or even fillings, but a new species that is a fully fledged member of our human lineage.

I felt that had to be said as the debate has polarised opinion around the world, and I didn’t want you trying to second-guess my position and have that get in the way of this review. That said, I don’t want to get into the debate here and now, as exciting and controversial as that is. Arguments have raged over the last four years regarding the nature and taxonomic relationships of the little people of Liang Bua, and it seems that for a while we needed insightful review articles every three or four months just to keep up. We’re probably due for another one pretty soon, but this is not it.

Instead, I want to applaud Mike Morwood and Penny van Oosterzee’s book on the background to the Flores discoveries and the impacts they had on the lives of the central players. Among many standout features of the book, I was struck by the humanity of the story, of Morwood’s rollercoaster of anxiety, delight and frustration, of Peter Brown’s amazement and stubbornness, and of the complex and intricate network of political obligation and social hierarchy that seems to characterise Indonesia’s archaeological and palaeoanthropological fraternity.

With Oosterzee’s extremely able assistance, Morwood traverses the rich historical, intellectual and physical landscapes that characterise H. floresiensis’ discovery and the public reaction to it. As one would expect there are plenty of references to the historical contexts against which the discovery had to be assessed. References to Darwin, Wallace and Dubois are de rigour, but the time taken to acknowledge the vital contribution of Father Theodor Verhoeven as the first (albeit amateur) archaeologist to investigate Flores’ Pleistocene history is poignant. Morwood introduces some of the historical figures involved in Dutch palaeontology and geology during the 1960s, and the ways in which they snubbed Verhoeven’s conclusions about the early presence of Homo erectus in Southeast Asia, some 30 years prior to the more recent discoveries in Flores. I initially wondered at the reason why so much time would be spent on presenting such a minor matter, but I believe that Morwood genuinely wanted to amend the historical record in this regard and allow Verhoeven to have his moment in the sun. From Morwood’s point of view, it also helps to understand why it took so long for recent attention to swing away from Africa and back to Asia as an important source of new information about the human story.

As those of you have heard Morwood speak on the subject know, he is all about history as an essential context for understanding the present, and for him the littlest detail is important. Even to the point of identifying by name the Pro-Vice-Chancellor at the University of New England who prevented Morwood from returning to Indonesia at time when tensions between the senior research partners were admittedly high and there was a serious risk that the fossil remains would be transferred out of the project team’s custody.

In fact, Morwood is big on naming names. His warts-and-all, blow-by-blow description of the sequence of events that saw a breakdown in his partnership with Raden Pandji Soejono, and the temporary loss of the remains to Teuku Jacob and the subsequent public stoush over the damage that they sustained, is a little shocking. But then again, the whole sorry saga has left a somewhat bitter aftertaste, played out as it was in the public arena, and it is possible that Morwood felt it was important for him to put forward his version of the story in a more comprehensive and controlled setting. And it is these very features of the book that make the story so appealing – it presents the players as human, as people with foibles, and not as disembodied research machines who take a back seat to their discoveries.

The authors devote quite a bit of space to educating the reader about the principles of island biogeography, and the evolutionary mechanisms that make big animals small and vice versa. Their relevance to arguments about how such a small-bodied, small-brained individual as LB1 could have come to be is lucidly presented. What is not so well explained, however, is the fact that according to archaeological evidence, H. floresiensis co-exists with modern Homo sapiens in the region for at least 38,000 years, until the demise of the former at around 12,000 BP, without there being any evidence for modern humans on Flores until after the other’s disappearance from the fossil record. Their conclusion that modern humans were responsible for the extinction of the little people is at odds with their references to oral histories that indicate the possible presence of ‘hairy little men’ until recent times. You can’t have it both ways.

One of the most interesting parts of the book for me was Morwood’s description of the various models the research partners argued in order to develop a taxonomy for H. floresiensis. This was a rare insight into the process, and helped to situate the remains within a broader international perspective. Of course the debate still rages.

Morwood clearly respects local customs. He was not averse to allowing chickens to be sacrificed and their entrails consulted in order for work to able to proceed smoothly. In fact, Mowood spends quite a bit of time describing the day-to-day working life of a field archaeologist, which for many non-specialist readers will be somewhat of a revelation. Despite the cheese factor sometimes reaching dangerously high levels (the ‘unchewable meat’ story on p.36 sounds like a ‘you had to be there’ kind of moment), the general tone of the book is very engaging apart from the occasional aside where some readers will wonder at their relevance.

This is a great read, one that I would recommend wholeheartedly.

Michael Green
Review of ‘The Discovery of the Hobbit: The Scientific Breakthrough that Changed the Face of Human History’ by Mike Morwood and Penny van Oosterzee
June 2009
68
66-67
Book Reviews
You must be a member to download the attachment ( Login / Sign up )