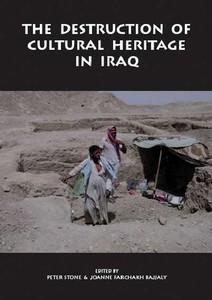 The looting of the Iraq Museum in April, 2003, aroused unprecedented scorn and outrage, most of which was directed against the Coalition forces for not protecting it, rather than the looters themselves. This book details the sorry tales of warnings to the US State Department by American academics with detailed knowledge of sites and monuments that required protection in the build-up to the invasion and visits by foreign academics and UNESCO bureaucrats to the looted museum. It then goes on to investigative efforts by US forces charged with recovering the looted antiquities. The suspicion surrounding Donny George and Jaber Ibrahim, Chairman of the State Board of Antiquities, is also dealt with as well as the subsequent large-scale looting of sites in Iraq and post-war attempts by INTERPOL and other agencies to stem the tide of Iraqi antiquities hitting the market. It all makes for depressing reading, to put it mildly.

Nevertheless, the looting of the Iraq Museum is a part of history around which much misinformation has swirled in the popular media. Although it was in some respects a seemingly inconsequential event in a war which has left hundreds of thousands dead, it must surely rank as one of the greatest cultural heritage calamities in history and, as such, deserves careful study. The Destruction of Cultural Heritage in Iraq, is therefore a very welcome addition to the literature on this dark episode and should be of interest not only to archaeologists and museum or heritage specialists, but to criminologists and law enforcement officers as well.

The 28 chapters in the volume are written by a wide-range of authors, including specialists in Mesopotamian archaeology, Iraqi bureaucrats, museologists, opponents of the antiquities trade, cultural property lawyers, journalists, police officers, UN officials and others. The multiplicity of authors with differing areas of expertise and perspectives gives this book far greater authority and less bias than two other works that have appeared already on the same subject, namely A.M.H. Schuster and M. Polk’s, The Looting of the Iraq Museum, Baghdad: The Lost Legacy of Ancient Mesopotamia (Harry Abrams, 2005) and M. Bogdanos’, Thieves of Baghdad: One Marine’s Passion to Recover the World’s Greatest Stolen Treasures (Bloomsbury, 2005). The title of the latter volume, alone, hints at a sensationalism and a degree of hubris that is distasteful, particularly for anyone who visited Baghdad shortly after the looting occurred.

There are many solid contributions in this volume by people who played an active part in the events that unfolded following the looting of the Iraq Museum. Particularly significant in this regard are the chapters by Donny George (‘The looting of the Iraq National Museum’), Matthew Bogdanos (‘Thieves of Baghdad’), John Russell (‘Inside the CPA [Coalition Provisional Authority]) and Ugo Zottin (‘Italian Carabineers and the protection of Iraqi cultural heritage’). Less satisfying are the accounts by authors detailing what their national committees or institutions did for the Iraqis. It is too apparent that, notwithstanding perfectly generous motives, the efforts of the British Museum, the German government and the French Institute of the Near East (IFPO) reflect a lingering desire amongst some academics in those countries to assert the sort of dominance in Mesopotamian scholarship that was a fact of life in the years of the Mandate following World War I and the pre-1991 Gulf War era. Scholarly dominance in non-Western fields and colonialism have a nasty history of co-habitation, and there are plenty of signs about that for some, scholarly efforts in a field like Mesopotamian studies still constitute a source of (misplaced) national pride.

One of the strengths of this volume, however, is the fact that it deals not only with the looting of the Iraq Museum, but with looting in the countryside at archaeological sites, and with the looting of libraries and art museums that received far less publicity than the archaeological museum. The only defect in this otherwise admirable collection is the absence of an index. With such a wealth of data, the utility of this volume would have been immeasurably enhanced if the editors or publisher had bothered to provide one. The lack of an index makes it far more difficult to cross-check statements made concerning the same events in the works of different contributors. Otherwise, this volume can be warmly recommended to anyone interested in the sordid tale of Iraq’s rape in the wake of the latest, and almost certainly not the last, Gulf War.

Dan T. Potts
Review of ‘The Destruction of Cultural Heritage in Iraq’ edited by Peter Stone and Joanne Farchakh Bajjaly
June 2009
68
73-74
Book Reviews
You must be a member to download the attachment ( Login / Sign up )