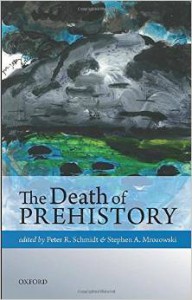 Schmidt and Mrozowski’s edited volume, The Death of Prehistory, traces the rise and fall of the concept of prehistory and, in so doing, outlines the many ways in which it has problematically bolstered an untenable sense of Western superiority and obscured the deep and complex histories of non- Western peoples. Importantly, in addition, through a collection of case studies, the volume offers practical ways in which post-colonial archaeologies can deconstruct and move beyond the prehistory/history divide.

The volume is based on papers that were presented at the 2010 Society for Historical Archaeology Annual Meeting, Amelia Island, Florida, in the session ‘Prehistory as History or the End of Prehistory: Deep-Time Non-Western Histories and Issues of Representation—Their Implications for ‘Prehistory’’, which was organised by the Editors, Peter Schmidt and Stephen Mrozowski.

Following the Editors’ introduction, the volume is separated into three parts, ‘Part I: Histories of Prehistory’, ‘Part II: Perspectives Arising out of Africa and India’, and ‘Part III: Perspectives Arising out of the Americas’. Unfortunately, despite the advertisement that the book contains 14 essays by ‘notable archaeologists of the Americas, Africa, Europe and Asia’, which suggests a broad geographical spread, the volume is heavily weighted toward the Americas (six case study chapters), with Africa (three eastern African case study chapters) and Asia (one India case study chapter) receiving much less attention, and Europe none at all. Furthermore, with direct relevance for this journal, it is surprising that the Editors do not include specific chapters about issues of prehistory in Australia and New Zealand.

Although it is always difficult, if not impossible, to generate a thematic and geographically proportional spread in an edited volume, the lack of focus on these regions is problematic here, especially with regards to European- and Australian-specific responses, considering that this is where the term prehistory is, in my experience, still in most use. Indeed, even though I fully agree that prehistory should meet its end, in the absence of a sufficiently strong counter argument to those included from Africa, Asia and the Americas, this volume runs the risk of only preaching to the converted.

For example, although the life and death of prehistory is a fascinating part of the history of archaeological thought, at first glance as an archaeologist with a research focus on African material culture it feels a little bit like old news. Indeed, by the time I began archaeological studies in London in the late 1990s, despite the persistence of units on ‘European Prehistory’, the notion of an African prehistory had been thoroughly unpacked, debated and firmly rejected. The difference at the time presumably was that, in contrast to studies of African pasts, prehistory was not felt to have been comparably used to deny the cultural accomplishments of European peoples and thus was not politically problematic within that context and consequently retained some usefulness. However, this latter point is now increasingly contested, as the history of non or less literately defined European heritages, such as those of the Sami, which have been marginalised due to the lack of written histories and classed as prehistoric, are receiving more attention.

Nevertheless, despite progress in this area, as Schmidt’s and Mrozowski’s introduction, and Kehoe’s and Lane’s ‘Histories of Prehistory’ chapters identify, prehistory remains alive and well as a functioning concept in European archaeology. For example, at an Indigenous archaeology workshop I attended in Uppsala in October 2013, ‘Africanist’ archaeological colleagues were surprised by, and some publicly questioned, the unproblematised use of ‘prehistory’ by ‘Europeanist’ colleagues, only to find that they were equally surprised by the problems we attached to such use.

Furthermore, despite efforts by some in Australia, including the journal of Australian Archaeology, to avoid the use of the term prehistory (as also identified by Lane), based on two years recent university teaching experience in Sydney, I would contend that ‘prehistory’ is alive and well as an unproblematic concept in the discipline of archaeology with regards to pre-European contact Indigenous Australian periods.

Thus, it seems a shame not to have archaeological perspectives from these and other areas of the world that defend and contest the use of the term to potentially expand the debate here beyond the converted. For example, from the perspective of African archaeology, having recently attended the 14th Congress of the Pan African Archaeological Association at the University of the Witswaterand in South Africa (July 2014), I doubt anyone at that conference would have used prehistory without considerable problematisation of the term.

Nevertheless, whether this volume is as pertinent and as original as its Editors suggest, the chapters within it make a highly valuable contribution to the continued progress toward a decolonial, or more post-colonial, archaeology—a project to which Schmidt, Lane and others have long committed themselves. For example, within Part I, Lane’s chapter reflects on the way in which the prehistory/history divide has been used as a tool of modernity that constructs some people as modern and others as premodern and in so doing deliberately or unwittingly supports a social evolutionary hierarchy. However, Lane contends, ‘modernism is a myth’ (p.65), a construct much the same as the prehistory/history divide and thus one that can be deconstructed and replaced. In response, and as a way of moving toward a more post-colonial archaeology, Lane powerfully suggests that if we understand ‘archaeology [as] a form of presencing the past in the present, through the use of material remains from the past, far from being unique to the modern era and a purely

European construct, archaeology forms a central strand of practice in all societies whether past, present or future’ (p.66). In this way, the presencing of the past through archaeological work is a material memory practice that unites all societies and thus may replace the prehistory/ history divide.

Moving on to Part II and eastern Africa, the chapters by Waltz and colleagues, and La Violette again tackle the issue of the problematic prehistory concept but, most importantly (in my view), contribute toward an invigorated post-colonial archaeology by highlighting general issues inherent to the colonial development of archaeology in the region and by outlining ways in which to create more nuanced, locally informed, pasts.

For example, firstly, in Tanzania Waltz exposes how the concept ‘hinterland’ is linked and comparable to ‘prehistory’ in the way that the two have often been combined and constructed as almost unknowable, marginal masses. In contrast, by deliberately targeting these constructed margins, and by exploring local living oral accounts, Waltz finds that these supposed margins actually have deep and dynamic histories that should be central to our understanding of the region’s history. Indeed, it is Waltz’s ‘hope that others will seek the forgotten people at spatial and temporal edges to make new, more integrative histories that dissolve rather than reinscribe essentialisms like prehistory and hinterland’ (p.91).

Secondly, moving from the conflation of time and space in Tanzania, Schmidt tackles the conflation of politics and past in Uganda and the way in which some oral histories, once considered prehistory, have, over recent times, been variously authorised as truth or dismissed as myth by the colonial and neocolonial West dependent on their political usefulness. In this way, Schmidt associates the choice whether to identify something as prehistoric or not with the shifting political landscape. In response, Schmidt promotes a return to structuralism as a way to analyse oral histories and produce new, more critically informed, historical perspectives.

Thirdly, and finally for eastern Africa, Pawlowicz and La Violette analyse the relationship between the supposedly historic Swahili coast of southern Tanzania and the supposedly prehistoric but contemporary non-Swahili coastal and interior sites. In their chapter, they summarise how their deconstruction of a selection of Swahili chronicles exposes biases associated with the context of their construction, for example, the heavy focus on external, foreign origins, and then use these new perspectives in combination with archaeological analyses to reinterpret coastal relations and ultimately to challenge the interpretation of some contemporary neighbouring communities as prehistoric and others as historic.

Consequently, by challenging the notion of prehistory, the authors move us into familiar, but still highly relevant, ground regarding the disenfranchisement of local peoples from their pasts and the need to engage with those communities, and the way in which colonial and neo-colonial archaeological practices have imbued the past with Western politics and thus the need to deconstruct and revise those pasts with new perspectives.

Following the India and Americas chapters, which I have not summarised here due to a lack of space and because they are outside of my field of experience, the Editors conclude with a series of questions, the answers to which are intended to clarify their positions at the close of the volume. These include: ‘How does recent writing in ‘deep history’ particularly the popular new book, Deep History by Shryock and Smail, relate to this volume?’; ‘Many archaeologists engaged in prehistoric research do not interact with indigenous or local communities. It is commonly said by prehistorians that ‘we deal with dead people and do not have to worry about the living’. Given this disposition what advantage does a collaborative approach have for prehistorians?’; ‘Why in an era of postcolonial study is it necessary to dwell on prehistory?’; ‘Why do time and space issues arise in this discussion and why are they important? How does place relate to space?’; ‘The concept of entanglement with different temporalities is used throughout the volume. Why is this pertinent to contemporary archaeology?’; ‘Oral traditions are mentioned in many chapters as central to understanding how other, non-Western cultures construct their histories. When oral traditions are widely felt to have limited usefulness, why are they emphasised?’; ‘How does the concept of liminality contribute to a different approach in making histories?’ and ‘Is there a difference in the way the authors of this book approach their work compared to other archaeologists?’ (pp.292–300).

In summary, if you do not have time to read this volume all you need to know is that prehistory is a problematic term that creates an artificial divide between Western valorised pasts and others. And if that is all you want to know then perhaps this review will save you some considerable time. However, as a volume of chapters that continue to push the envelope of the post-colonial archaeological past in the Americas, India and eastern Africa this is an important work.

Giblin, J.
Review of ‘The Death of Prehistory’ edited by Peter Schmidt and Stephen Mrozowski
June 2015
80
S155-S156
Book Reviews
Download
You must be a member to download the attachment ( Login / Sign up )