Review of ‘The Bronze Age of Southeast Asia’ by Charles Higham 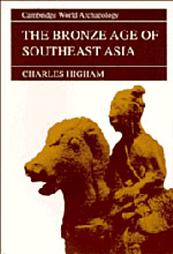 The Bronze Age of Southeast Asia is the latest addition to the Cambridge World Archaeology series. Each volume in the series is intended to present an up-to-date survey of the archaeology of a region for professional archaeologists, students and academics in related disciplines. In this Higham has succeeded despite formidable obstacles. The archaeology of Southeast Asia is characterised by often conflicting primary data that have been recorded and interpreted in a bewildering array of languages. Higham manages to synthesise this confusion of data into a coherent whole, while still maintaining much of the original integrity of the data for independent inquiry.

Instead of simply revamping his earlier work, The Archaeology of Mainland Southeast Asia (Higham 1989), this new book specifically tackles one of the more controversial periods in the region’s prehistory – the Bronze Age. The Southeast Asian Bronze Age has been considered anomalous in the context of world prehistory because the first use of bronze in the region appears to pre-date the rise of social elites and specialist bronze workers by two millennia or more. Higham deals with the issue by addressing two key questions:

a. Was the Southeast Asian Bronze Age an early, independent development in the late 3rd/early 2nd millennium BC, and

b. What was the social context in which bronze first appeared and how did its use develop over time?

In the early chapters, Higham poses these questions in the context of current research on the Southeast Asian Bronze Age and its historical development. He presents the evidence needed to answer these questions in the central chapters through a critical and systematic site-by-site review of the available dates for bronze technology in the region and the social contexts in which bronze is found. An innovation in this review is the inclusion of the monsoonal provinces of southern China – Yunnan and Lingnan – in what Higham defines as Southeast Asia. The author also provides a broader regional context for evaluating this evidence in the chapters summarising the Bronze Age in China, eastern India, coastal Vietnam and Island Southeast Asia. In the final chapter, Higham discusses the evidence presented, offers some conclusions in answer to the questions posed and draws comparisons between the Southeast Asian Bronze Age and the Bronze Age in other parts of the world.

In particular, the author argues that the early dates for bronze at sites such as Ban Chiang and Nok Nok Tha are suspect, and that bronze in fact first appears in Southeast Asia around the period 1500-1000 BC. This post-dates the first bronze in China and coincides with the appearance in Southeast Asia of exoticjade and bronze ornaments of Chinese origin, prompting Higham to suggest that knowledge of bronze technology travelled to Southeast Asia from China’s Yangzi River Valley along the same southward flowing rivers that supposedly brought rice-cultivators to the region a thousand years earlier. This late date for the first bronze in Southeast Asia also means that bronze technology existed in the region for at most a millennium before social elites and bronze craft specialisation appeared, bringing the Southeast Asian Bronze Age into line with the rest of the world. Higham remains cautious, however, conceding that further research may yet turn up good early evidence of bronze, keeping alive the possibility that Southeast Asian metallurgy was an indigenous development.

Higham’s argument and conclusions are convincing, but they form only a small part of the text, often overwhelmed in what is, by necessity, a data rich monograph. The author is systematic, almost relentless, in providing the many detailed site inventories, plans and lists of available dates for each area discussed. Unfortunately, as the author’s argument outlined in the introductory chapter is not much advanced until the final chapter, I often found myself losing sight of the author’s purpose while wading through the evidence. This is, of course, a minor structural quibble and does not affect the book’s essentially high academic worth and relevance.

My only criticism of content concerns the author’s inclusion of the southern Chinese provinces of Yunnan and Lingnan in his definition of Southeast Asia. Yunnan and Lingnan may be needed in the book to advance the argument that bronze technology travelled down the rivers radiating out of the Yangzi Valley, but the evidence Higham presents reveals little cultural similarity between these areas and the rest of Southeast Asia. Instead, the complexity and quantity of bronze artefacts, especially weaponry, found in Yunnan and Lingnan, reflect the proximity of Chinese civilisation and threat of expansion during the Bronze Age, while in Thailand, Cambodia and Laos, low population density and insulation from Chinese threat and culture manifests in their creation of bronze ornaments which parallel simple ornament forms previously made from shell and stone. Bridging this cultural divide reduces the distinctiveness of Southeast Asia as a region, and, I think, conflicts with the author’s conviction that ‘Southeast Asia should take its place alongside other major regions and cultures’ (p.337).

These concerns aside, there is much of interest and value in the book simply because of the intimate glimpses it provides of life in the Bronze Age – the bronze house models and models depicting feasts and rituals from the Dian culture of Yunnan are a good example. Higham also develops a vivid picture of changing social life in communities such as Khok Phanom Di, by tracing the growth and decline of family groups. He does this by analysing the spatial and chronological distribution of graves, and the relationships between grave goods and the sex and age characteristics of the people interred. Such insights, and the collection and critical review of so much hard-to-access data, will ensure this book becomes a valuable resource for students and specialists working in the growing sphere of Southeast Asian archaeology, as well as for those interested in studies of early metallurgy and the growth of social complexity in general.

Theunissen, R.
Review of ‘The Bronze Age of Southeast Asia’ by Charles Higham
June 1997
44
73–74
Book Reviews
Download
You must be a member to download the attachment ( Login / Sign up )